[Brief]  The U.S. Coast Guard released a video of a dramatic high seas rescue of four injured sailors on a small sailboat caught in heavy weather and unable to use regular means of communication. According to the Coast Guard, the four onboard only had the ability to send messages via Twitter in addition to their EPIRB (Emergency Position Indicating Radio Beacon) to summons help.

An MH-60 Jayhawk helicopter crew was dispatched on May 8 from Massachusetts to find the sailboat which was approximately 80 nautical miles south of Montauk, New York caught in high seas. The 39-foot sailing vessel Calypso had departed Bermuda bound for Connecticut when it encountered the heavy weather. TV station NBC 10 Boston reported that the vessel had been severely damaged by the high waves injuring the four sailors aboard. 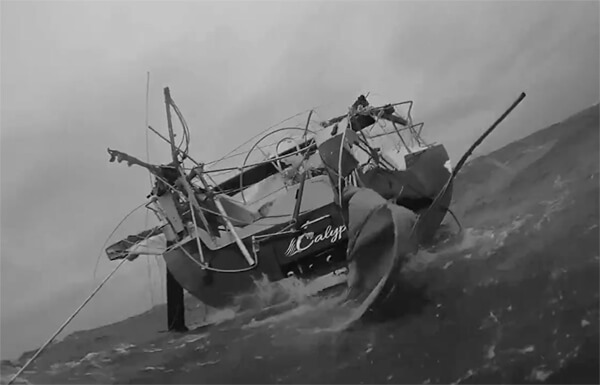 “Upon arrival, it was discovered that the vessel had been de-masted by a rogue wave, injuring all four crewmembers,” Air Station Cape Cod recounted in its social media posting. “Battling heavy seas and challenging hoisting conditions, our MH-60T crew effectively rescued all four individuals.”

The sailboat was moving violently in 16-to-17-foot seas when the helicopter and rescue team located them. The four people aboard the boat were successfully hoisted to the helicopter and flown to Gabreski, New York to receive medical attention.

The Coast Guard commander told the local TV station that it was one of the best examples of crew coordination and teamwork under difficult conditions to successfully complete the rescue mission.