The U.S. Navy has underway one of its largest show of strength training exercises uniting two carrier strike groups with more than 14,000 sailors and marines in the South China Sea. This latest exercise is part of an ongoing series of joint training programs the U.S. has been conducting in the region.

The training however was briefly marred by a “landing mishap” on the deck while USS Carl Vinson while conducting routine flight operations in the South China Sea on January 24. An F-35C Lightning II experienced an unspecified problem forcing the pilot to eject from the aircraft during the landing. A total of seven sailors were reportedly injured with three being medevaced from the carrier for treatment in Manila, Philippines, and four were treated by onboard medical personnel. The pilot was recovered by a U.S. military helicopter and believed to be among the injured. The three that were taken to Manila are reported in stable condition, while one remains in the medical facility on the carrier and the three others were released. 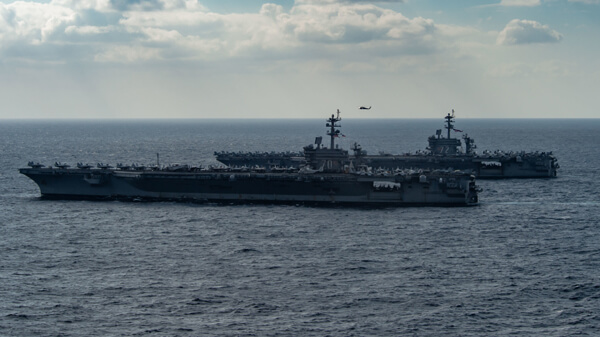 The Navy reports that the current exercise is part of the normal coordinated maritime engagements and operations in the South China Sea. Since arriving in the U.S. 7th Fleet region in early September, CSG 1 units have participated in multiple operations joined by units from Japan Maritime Self-Defense Force, the United Kingdom’s carrier strike group led by HMS Queen Elizabeth, and an exercise that included the Royal Australian Navy, Royal Canadian Navy, German Navy, and Japan Maritime Self-Defense Force.

As the U.S. Navy's largest forward deployed fleet, U.S. 7th Fleet routinely operates between 50-70 ships and submarines and 140 aircraft with approximately 20,000 Sailors. U.S. 7th Fleet's area of operation spans more than 124 million square kilometers, stretching from the International Date Line to the India/Pakistan border; and from the Kuril Islands in the North to the Antarctic in the South Pacific. 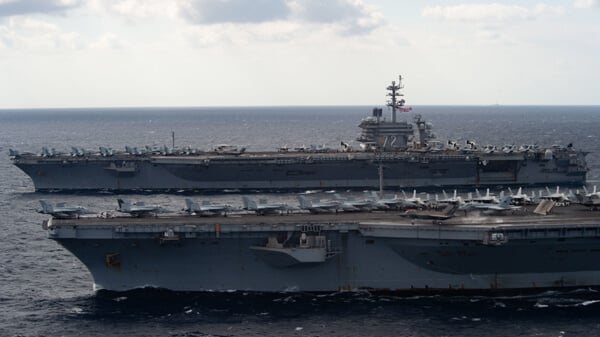