Denmark’s Marine Home Guard was able to salvage the general cargo ship that was involved in a North Sea collision early on Friday and tow the vessel to port. The 5,000-dwt general cargo ship Helge had initially been feared lost after the collision with its crew abandoning ship to be rescued by the Danish Navy.

The Marine Home Guard reports that it dispatched its patrol ship Dubhe at mid-day on Friday, September 9, to assess the extent of the damage to the cargo ship, which was drifting in the North Sea off the west coast of Denmark. The vessel, registered in the Netherlands and owned by Sweden’s Eric Thun, was bound from Antwerp to Norway when it collided with the Bahamas-flagged Wild Cosmos, a 10,000 dwt reefer traveling from Durban, South Africa to Tallinn, Estonia. The collision happened approximately 20 nautical miles west of the Danish town of Ringkøbing on the western coast of Jutland.

When the Marine Home Guard reached the Helge around 5:00 pm Friday afternoon they found the vessel had remained afloat despite the original expectations that it was sinking. They reported that weather conditions had improved dramatically since the morning when the vessel collided. The Danish tug Sigyn also arrived and together they completed a survey of the vessel and were joined by a salvage team airlifted out to board the vessel.

Describing the condition, commander Nikolaj Hviid of the Marine Home Guard reported that the Helge “had extensive damage from the strong impact,” and had taken in a lot of water. “The collision had occurred in violent weather with waves of several meters, but fortunately it had reversed, so Helge was now in reasonably calm in the water,” with waves under one meter.

Working with the salvage crew, they were able to attach a tow line to the vessel. The commander said that when they started the tow, Helge straightened up so that several large holes below the waterline became visible. The tug however was able to maintain the momentum and they reached Esberg Harbor around midnight and were able to secure the Helge.

The second vessel, the Wild Cosmos sustained only superficial damage in the collision. She was permitted to resume her voyage and is now showing a destination of Saint Petersburg, Russia, where she is expected to arrive tomorrow. The investigation into the cause of the collision is ongoing. 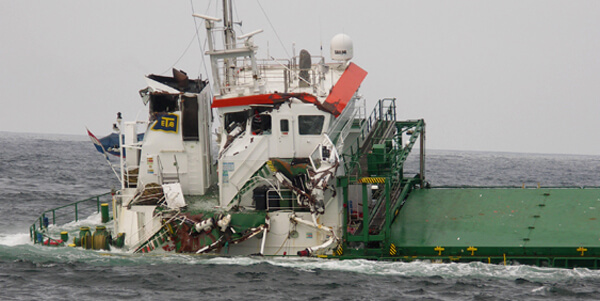