A first-of-its-kind SOV to operate under the Taiwan flag was recently floated out from VARD’s shipyard in Vietnam. Built from Vard’s 4 19 design, the vessel in addition to being the first classed and built for Taiwan represents a milestone for VARD which is working to expand its role in the renewable offshore energy sector and for Japan’s Mitsui O.S.K. Lines (MOL), which will operate the vessel under a joint venture.

Ordered in April 2020, the 277-foot long SOV was specifically designed to operate in the harsh environment in the Taiwan Strait. VARD reports that the hull design was optimized for the safety and comfort of the crew. The vessel incorporates several new features including a hybrid battery solution to reduce emissions and will use a dynamic positioning system to automatically maintain its position. The vessel also employs the “walk to work” concept with a height-adjustable motion compensated gangway with an elevator system, a height-adjustable boat transfer system, and a 3D-compensated crane for cargo transfer. It will house up to 60 technicians plus the crew and will only need to return to shore once a month.

Being built at the Vard Vung Tau shipyard, the vessel is slated for delivery in early 2022 to Ta San Shang Marine Co., a joint venture company by Japan’s MOL and Taiwan’s Ta Tong Marine Company. VARD reports that it is the first SOV tailor-made for the Asian wind farm market. Named TSS Pioneer, the vessel will operate under a 15-year contract with Orsted to service the Greater Changhua Offshore Wind Farm. 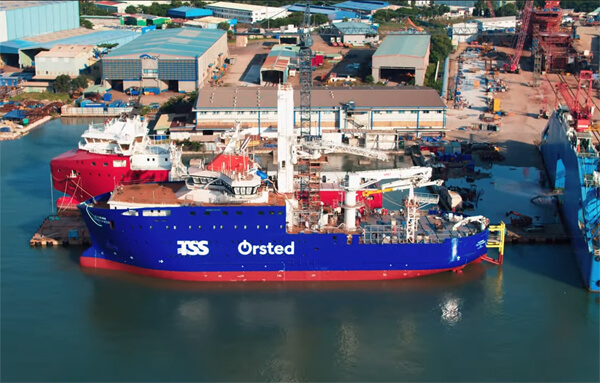 Construction is underway on the first phases of the wind farm, which will be located between approximately 20 and 40 miles offshore becoming Taiwan’s furthest at sea facility. The foundations have recently been placed with the turbine installation scheduled for early 2022. The first phases of the project, scheduled to begin commercial operations before the end of 2022, will have a capacity of approximately 900MV. Orsted has also been awarded the right to build another 920MW offshore wind in Taiwan through its Greater Changhua 2b & 4 sites, which if the company proceeds with that phase, would begin operations in 2025.

MOL announced at the beginning of 2021 that it was launching a new business unit focused on the offshore energy sector. The Japanese shipping company is working to expand its operation for the emerging sector and is positioning to play an active role in the installation and maintenance of Japan’s planned offshore wind farms.