The crew of the guided-missile destroyer USS Jason Dunham has finished the tally of the illicit weapons shipment they seized off Yemen on August 28. The stateless skiff they boarded was carrying 2,521 AK-47 automatic rifles, shipped from an unknown source to an undetermined destination.

The count follows an initial estimate of more than 1,000 rifles.

“As a part of our counter-trafficking mission, we are actively involved in searching for illegal weapons shipments of all kinds,” said Vice Adm. Scott Stearney, commander of U.S. Naval Forces Central Command, U.S. 5th Fleet. “Ensuring the free flow of commerce for legitimate traffic and countering malign actors at sea continue to be paramount to the U.S. Navy and its regional partners and allies.

Part of a trend

The seizure comes after four weapons seizures in 2015 and 2016 by Combined Maritime Forces and U.S. 5th Fleet assets. 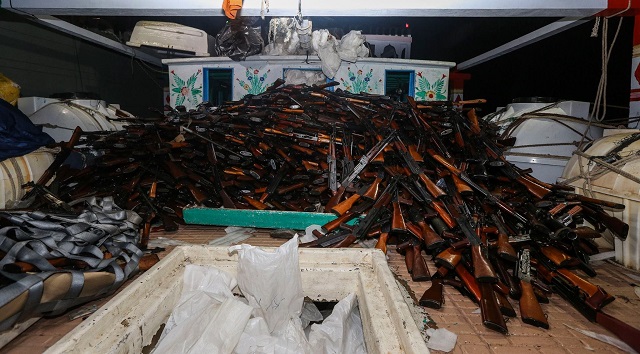 The British investigative group Conflict Armament Research linked three of the caches to Iranian stockpiles. Based on an analysis of all available information, including crew interviews, a review of onboard records and an examination of the arms aboard the vessel, the United States concluded that the arms from the four interdictions in 2015 and 2016 originated in Iran and were intended to be delivered to Houthi rebel forces in Yemen.