VIDEO: US Fires Warning Shots as Iranians Approach in Strait of Hormuz

For the third time in a matter of weeks, the U.S. Navy is reporting that vessels of the Iranian Islamic Revolutionary Guard Corps Navy have harassed U.S. vessels in international waters. The U.S. Navy says that the Iranian vessels conducted unsafe and unprofessional maneuvers to which the U.S. forces ultimately responded by firing warning shots. It is the second time the U.S. has responded with warning shots, the previous incident being on April 26.

Today, May 10, Iranian fast in-shore attack craft, a type of speedboat armed with machine guns, operated close to the U.S. vessels transiting the Strait of Hormuz. According to the reports from the Navy, a group of 13 IRGCN fast boats made a high-speed approach on the U.S. Navy guided-missile cruiser USS Monterey, patrol coastal ships USS Thunderbolt, USS Hurricane and USS Squall, Coast Guard patrol boats USCGC Wrangell and USCGC Maui, and the guided-missile submarine USS Georgia. The U.S. naval vessels were escorting the Georgia, as the submarine was transiting on the surface.

Two of the 13 IRGCN vessels broke away from the larger group, transited to the opposite side of the U.S. formation, and approached the Maui and Squall from behind at a speed in excess of 32 knots. During this high-speed approach, the Iranian vessels had their weapons uncovered and manned.  The remaining Iranian vessels maintained their position, the result being that the Iranians were operating on both sides of the American formation. 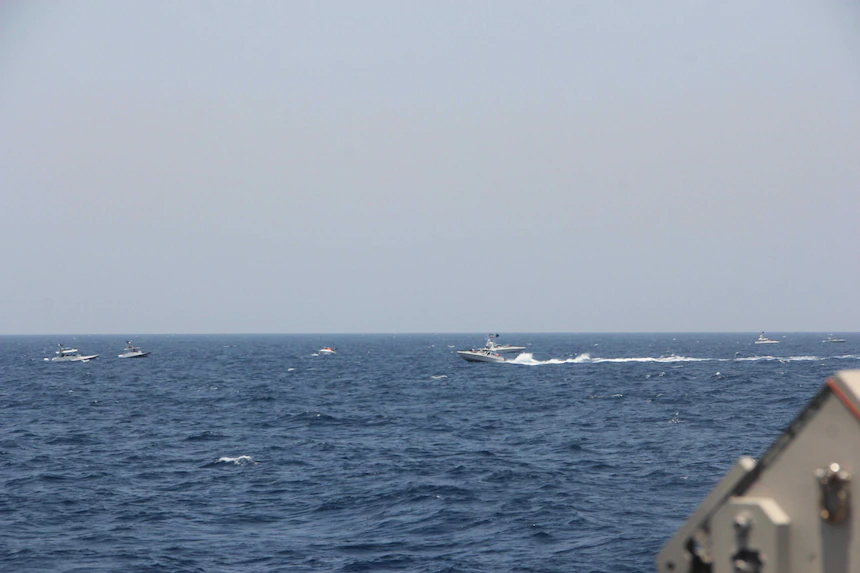 In an attempt to de-escalate the situation, the U.S. Navy says that its crews issued multiple warnings to both groups of IRCGN vessels. The Maui and Squalls’ warning to the two fast boats that had broken away from the main group including repeated bridge-to-bridge verbal warnings, five acoustic device warnings, and five short blasts of the ship’s horn.

After the two IRGCN vessels failed to respond to repeated warnings and closed within 300 yards, the Maui “exercised lawful de-escalatory measures by firing warning shots,” the Navy said in its statement. The two IRGCN vessels again failed to respond to warnings and closed to within 150 yards of the Maui, at which time the Maui fired additional warning shots.

After the actions by the U.S. naval ships, the two Iranian fast boats altered course and increased their distance from the U.S. forces.

Today’s incident took place in daylight whereas the previous approach on April 26 took place at night. At the beginning of April, a larger Iranian catamaran escorted by the fast boats also approached two U.S. Coast Guard patrol boats operating in the Arabian Sea. In that incident, the Iranian vessel maneuvered close to the U.S. vessels and cut across their bows. Warnings were issued, but no shots were fired.

U.S. commanders reported that the Iranians had stopped these types of actions against the U.S. over the past year, but in the past had conducted similar approaches. It is unknown if these are independent forces or if the approaches have been ordered by the Iranian central command.