The U.S. Coast Guard continued its international training exercise and extending its relationship with Japan’s naval forces. The cutter Kimball conducted a joint exercise with members of the Japanese Military Special Defense Forces off the coast of Dutch Harbor, Alaska.

The Kimball crew and the JMSDF crew, aboard the naval training vessel Kashima, operated alongside one another in the Aleutian Island chain. While sailing together they exchanged visual communications, followed by honors, as their respective crews lined their ship’s rails for a uniform salute. The first joint exercise between the Kashima crew and a Coast Guard crew occurred in the Bering Sea in September 2020 with operations by the Coast Guard Cutter Alex Haley.

“The Kimball crew welcomed the opportunity to meet the Kashima and conduct a professional exercise at sea,” said Capt. Thomas D’Arcy, the Kimball’s commanding officer. “Seeing the crews aboard the Kimball and the Kashima line the rails for the passing of honors illustrates the spirit of collaboration between the U.S. Coast Guard and Japan’s maritime forces. The exercise, movements, and communications between our vessels were expertly executed and the salutes exchanged exemplify the strength of our relationship with Japan as a key partner.” 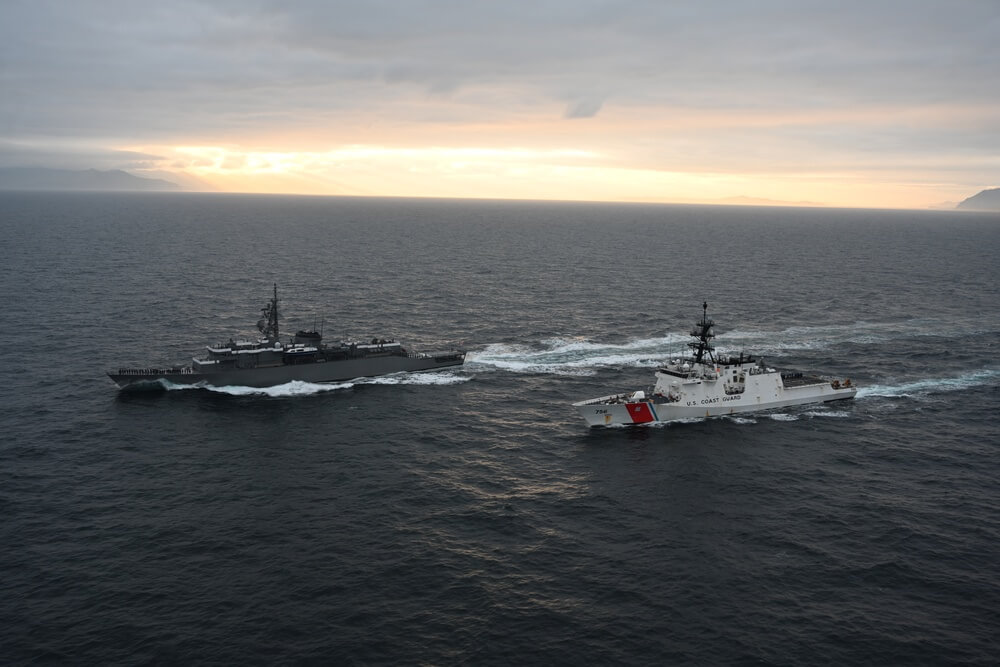 Over the past year, the U.S. and Japan have increasingly strengthened their relationship in the maritime domain through the shared mission set of the JMSDF and the U.S. Coast Guard. This includes search and rescue collaboration with the 14th Coast Guard District in Hawaii and the Japanese Coast Guard Training Ship Kajima, as well as exercises between the Japanese Coast Guard and the Coast Guard Cutters Kimball, Munro, and Bertholf near the Ogasawara Islands and in the North Pacific, respectively.

The Kashima is one of four training ships that belong to the JMSDF and is used to train new officers. About 110 newly-commissioned officers and more than 300 crewmembers are aboard the ship for its nearly two-month journey from Hiroshima to Alaska, up to the Arctic and Pearl Harbor, Hawaii, then back to Japan.