A week after the signing of the agreement with the United Nations to resume gain shipments from three Ukrainian Black Sea Ports, Ukraine’s president and other senior officials visited the ports to emphasize they are open and ready to start shipments. UN officials briefing the media said they were hopeful the first ships could depart before day’s end.

"The first vessel, the first ship is being loaded since the beginning of the war,” President of Ukraine Volodymyr Zelenskyy highlighted during a visit to the Chornomorsk Sea Trade Port on Friday. The Turkish vessel Polarnet, a 12,240 dwt cargo ship has been stuck in the port since mid-February but has begun loading gains for export. “This shows that the port has started working," said Zelenskyy during his tour meeting with UN and port officials and visiting ambassadors including representatives from the United States, UK, Canada, Italy, Germany, and EU.

“We are ready,” Ukraine’s minister of infrastructure said during the port visit pointing to at least six bulkers docked and believed to be loaded with grains. He said that Ukraine has taken all the necessary steps and was waiting for the signal for the ships to start moving from the UN and Turkey. 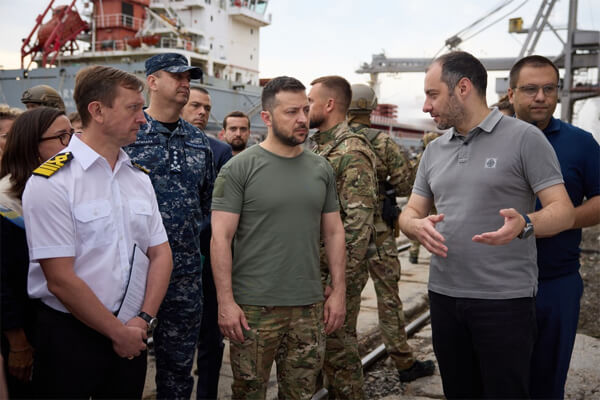 President Zelenskyy visits the port of Chornomorsk on July 29  (Presidential Office of Ukraine - CC by 4.0 license)

Separately, the UN’s representative Martin Griffiths who is overseeing the agreement said they were still working on a few final pieces. He said the UN was targeting to move between 20 and 25 million tons of grains during the first 120 days covered by the agreement. The UN has said that it believes the agreement will be extended but it is anxious to get the process going as quickly as possible. The first shipments are scheduled to go to Africa, the Middle East, and Asia which the UN highlights as facing the greatest food shortages. Before the Russian invasion in February, Ukraine was one of the largest global exporters of wheat, barley, corn, and sunflower oil.

Speculation is centering on which vessel would be first to depart or if they might move in small convoys. President Zelenskyy said the priority would go to vessels stuck in the ports since the beginning of the conflict and already loaded with grains. For symbolic reasons to acknowledge Turkey’s role in resuming the exports there has been speculation, that the Polarnet might be the first to depart while monitoring services point out that several other vessels are showing activity and have turned on their AIS broadcasts after having gone dark early in the war. The Malta-flagged bulker Rojen (41,550 dwt) also in Chornomorsk and the Panama-flagged Navi Star (38,200 dwt) docked in Odesa are among the other vessels seen to be active.

UN officials said one of the final sticking points has been an agreement on the exact path of the vessels leaving the Black Sea ports in the designated humanitarian corridors. They were reportedly still discussing the coordinates of the route with the Russians, who agreed to provide safe passage to the vessels under the deal signed with the UN on July 22. Some reports, however, said the Russians were continuing to demand equal passage and relaxation of restrictions for the movement of their exports including grains and fertilizer.

The agreement came into question just hours after it was signed when the Russians launched missiles striking targets near the Port of Odesa. Reports indicate that there have not been any further attacks on the port since July 23, but the Russians have repeatedly targeted Odesa raising fears for the safety of the vessels and the grain stores. Under the agreement, ships transporting grain were to have safe passage from Odesa, as well as Chernomorsk, and Yuzhny.

Security analysts have warned of the fragile nature of the agreement. Dryad Global wrote in its analysis of the UN-brokered deal said, “Whilst there are strong reasons for Russia to act strictly within the bounds of their agreement with Turkiye and prevent any attacks on grain terminals and ships, this conflict has repeatedly demonstrated the importance of never assuming Russia will behave within the bounds of reason.” 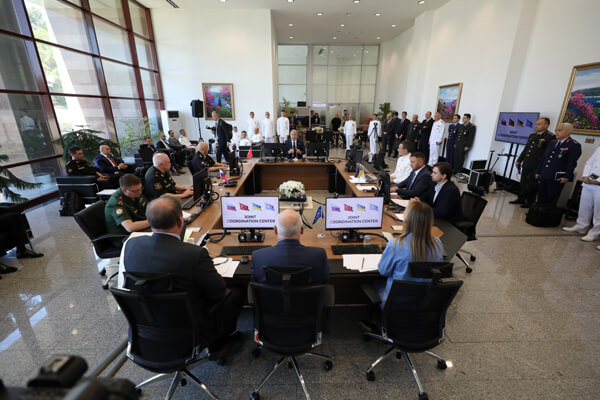 While trying to settle the final details with Russia, UN officials pointed to progress with other parts of the agreement. Turkish Defense Minister Hulusi Akar visited the joint coordination center which opened on Wednesday in Istanbul. It will establish the standard operating procedures and oversee the movement of the vessels as well as organize inspections to confirm that the vessels are not smuggling weapons or other cargo not covered by the agreement.

Shipping companies have reportedly been skeptical and concerned if the safety agreements would hold. On Friday, Lloyd’s of London confirmed that it would provide up to $50 million in insurance coverage for the cargo and war coverage. Confirming the insurance coverage was seen as one of the final elements necessary to begin the movement of the ships.

The vessels will be navigated out of the ports with Ukrainian pilots and smaller boats guiding them past the mines laid at the ports. Once they have reached open water, they will proceed to the Bosphorus where the inspections will be conducted.