The first convoy of three bulkers got underway from Ukraine this morning carrying approximately 57,000 metric tonnes of grain and corn as planned by the Joint Coordination Center in Istanbul. With the first ships also inbound for Ukraine, government officials are now calling for the agreement to be expanded to achieve their goal of restoring full operation at the Black Sea ports.

The bulkers Navi Star, Rojen, and Polarnet departed Odesa and Chornomorsk. They were escorted into open waters and past the mines set near the harbor entrances by Ukrainian pilots and harbor craft. By end of the day, the AIS signals show the vessels hugging the western coastline of the Black Sea passing Romania on route to Istanbul. There they will each be inspected by the JCC before continuing to destinations in the UK, Ireland, and Turkey.

Equally important to the success of the agreement, the bulker Fulmar S. was cleared as planned and is heading north in the Black Sea. She will become the first vessel to arrive in Chornomorsk since the onset of the war in February. Also, while not included in the JCC’s announcement yesterday, a second bulker the Osprey S. is moving north through the Bosphorus late today reflecting a destination of Ukraine. 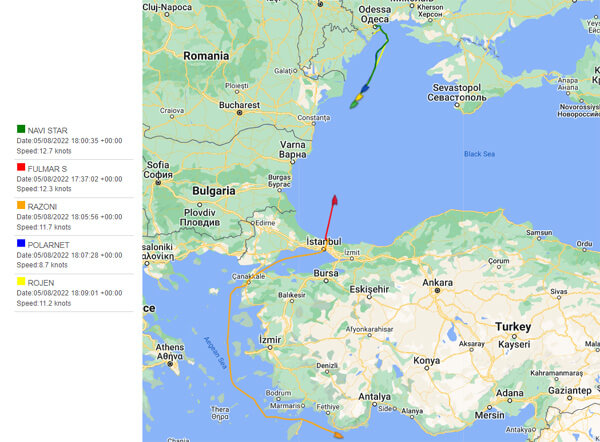 “We expect that the security guarantees of our UN partners and Turkey will continue to work and food exports from our ports will become stable and predictable for all market participants,” said Oleksandr Kubrakov, Infrastructure Minster for Ukraine.

UN officials have said their goal is to have a steady flow of grain moving out of Ukraine through the humanitarian corridor. They set a goal of up to five million tonnes a month. Kubrakov set the goal at three million tons or more saying that it would put them on their goal of moving 20 million tonnes of last year’s crop and start exporting new crops.

Kubrakov said Ukraine's goal is to have the capability to handle more than 100 vessels a month. The initial agreement brokers by the UN and Turkey agreed to move only grain and foodstuffs from Odesa, Chernomorsk, and Yuzhny. There has been some speculation that they might seek to expand the agreement to include one or more additional Black Sea ports. 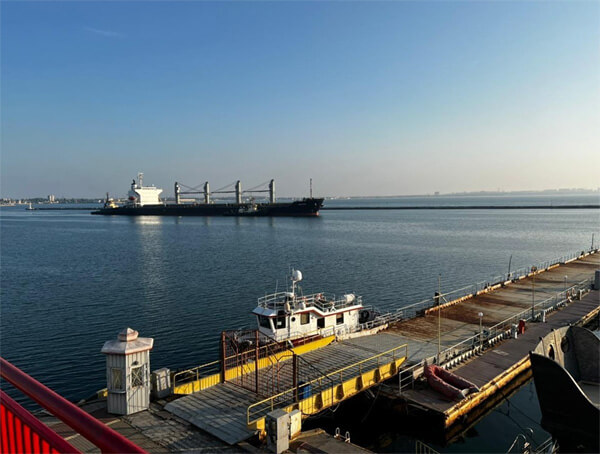 "This agreement is about logistics, about the movement of vessels through the Black Sea," Taras Kachka, Ukraine’s Deputy Economy Minister told Financial Times. "What's the difference between grain and iron ore?"

Observers point out that in addition to the bulkers a variety of other vessels also found themselves caught in Ukraine’s ports at the start of the war. The outlet Black Sea News reported that at least 24 foreign vessels were in the ports in February. They listed ro-ros, vehicle carriers, a tanker, and a Turkish containership among the vessels that they believe are still in the ports and unable to leave under the current agreement.

Echoing the comments of the economic minister, Kubrakov said, “Although the ‘grain corridor’ is already up and running for the day, our goal is to have full-fledged ports in both directions.”

The JCC continues to call today’s ship moment its second proof of concept. Their goal is to continue to monitor progress and refine the process to ease the movement of the bulkers back and forth across the Black Sea.