The UK Government has selected a startup that is developing a new approach to wind-assisted propulsion as one of the projects that will receive funding in the second round of a multi-year clean maritime demonstration competition. The project which launched in 2021 and continues to 2025 is providing research and development match-funding to support the design and development of clean maritime solutions with a goal of assisting toward commercialization of the selected technologies.

GT Green Technologies, a UK-headquartered wind propulsion specialist, is among the companies that will receive funding based on their presentations during this year’s Clean Maritime Demonstration Competition Round 2 (CDMC2). The company’s development and feasibility study for the AirWing was presented and accepted as part of the second round of the competition which ran between May and September 2022.

The AirWing utilizes innovative airflow technology, which according to the company maximizes fuel economy and minimizes carbon emissions. From the renderings released by the company, their concept appears similar to an airplane wing standing upright from the deck of the vessel. Unlike competing designs, GT Green Technologies appears to use an aileron or wing flap that adjusts the angle to maximize the yield from the wing. In its materials, the company says, “the novel airflow technology maximizes thrust to size ratio.”  Other designs from competing companies rotate the angle of their sails to the orientation of the wind. 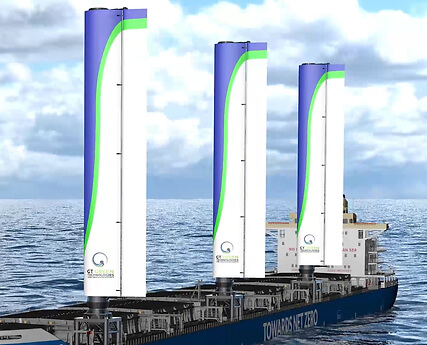 Like other concepts for wind propulsion assistance, the GT Green Technologies’ design lowers to the deck to avoid creating obstacles during load and unloading as well as air draft for the vessel. The company reports that it has applied for patents while highlighting the compact size of its wing saying it is suited for either retrofits or newbuilds.

GT Green Technologies is reporting that it believes that its design will produce a fuel saving on a retrofit vessel of between 10 and 30 percent with even greater savings for newbuilds. By comparison, Japan’s Mitsui O.S.K. Lines which was the first to install a rigid sail on a bulker said based on performance during the maiden voyage it is producing an expected five percent reduction on the route between Japan and Australia while it could increase to eight percent on Pacific crossings where wind conditions would be more favorable. A French startup, bound4blue, last week predicted its suction wing design would produce a saving of between 15 and 20 percent.

George Thompson, CEO of GT Green Technologies, said that the grant funding from the Department for Transport will greatly accelerate the development of the company’s wind propulsion system. He said the funding will provide the ability to enable an on-the-water prototype in the coming months. 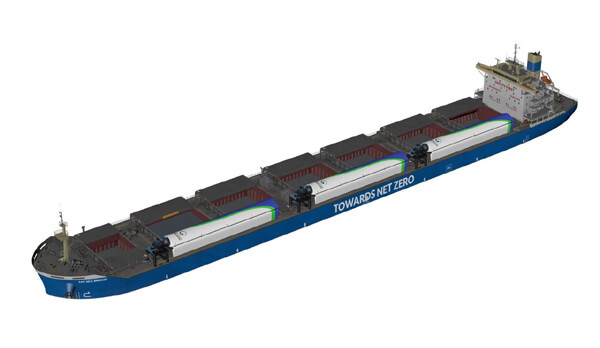 The CMDC2 is part of the UK Shipping Office for Reducing Emission’s (UK SHORE) flagship multi-year CMDC program. In March 2022, the department announced the biggest government investment ever in the UK commercial maritime sector, allocating approximately $240 million to UK SHORE to focus on organizations within the maritime sector with unique new technologies. The first round of funding which closed in March 2022 awarded approximately $27 million for 55 projects across the UK to deliver feasibility studies and technology trials in clean maritime solutions by August 2023.

The latest round of funding is being awarded to 31 projects which involve 121 partners. The government awarded a total of approximately $17.5 million to organizations from across the UK to deliver feasibility studies and collaborative R&D projects in clean maritime solutions. Last week, the UK closed applications for the third tranche of the project which will provide up to $70 million and will run from 2023 to 2025.