The U.K.’s Foreign Office has issued a terrorism-related travel advisory for its Antarctic territory.

“Although there’s no recent history of terrorism in the British Antarctic Territory, attacks can’t be ruled out,” says the advisory. “There’s a heightened threat of terrorist attack globally against U.K. interests and British nationals, from groups or individuals motivated by the conflict in Iraq and Syria.”

Increasingly, terrorists look for targets that aren’t well-protected where westerners can be found, says the government. These include places like bars, restaurants, shops, places of worship, tourist sites and transport networks. Significant dates, anniversaries, public holidays, religious festivals and political events have been targeted.

British Antarctic Territory is a 660,000 square mile part of Antarctica with three research stations and an average population of around 250 people. The Royal Navy maintains an ice patrol vessel in the area during the austral summer.

There is no history of terror attacks in the area. Colonel Richard Kemp, who led the British Army into Afghanistan in 2003, told The Sun: "MI5's then-director-general once said there was a terror threat almost everywhere except Antarctica. Now they've put Antarctica on the list.

“We expect guidance based on intelligence, not a pointless exercise in back-covering – unless I've missed the Islamic State Polar Brigade.''

The British Antarctic Survey welcomes a small number of visits to its stations from IAATO–affiliated companies during the austral summer. Small groups are given a guided tour of the facilities, where they have the opportunity to learn about the world-class science undertaken there and the logistics that support it.

Earlier this month, the International Association of Antarctica Tour Operators (IAATO) announced its tourism figures for the 2016-2017 noting that most Antarctic visitors originate from the U.S., but China has now moved up to second place ahead of Australia.

The number of visitors travelling to Antarctica with IAATO members was 44,367, an increase of 15 percent compared to the previous season. Overall, visitation levels, particularly in the cruise sector, have been increasing steadily since 2011-2012. Next season, 2017-2018, 46,385 visitors are expected.

American visitors remained the most numerous, increasing by seven percent in 2016-2017 and accounting for 33 percent of the total number. The number of Chinese visitors increased by 25 percent compared to the previous year, moving them up to second place. Australian, German and British visitors were the next most abundant nationalities, increasing by five percent, 45 percent and 19 percent respectively.

Most travellers depart from South America to visit the Antarctic Peninsula. The majority of these Peninsula visitors traveled the traditional route from Chile or Argentina on vessels that carry fewer than 500 passengers.

The Territory includes all the lands and islands in a wedge extending from the South Pole to 60° S latitude between longitudes 20° W and 80° W. 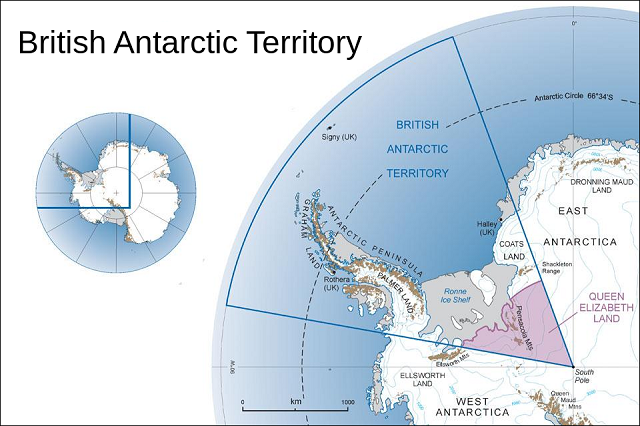