The world's first offshore charging points for wind farm vessels will be in operation as early as this summer, thanks to sponsorship from the government of the United Kingdom.

The project partners will design, build, and test an electric charging station affixed to the base of a wind turbine at the UK's Lynn and Inner Dowsing offshore wind farms. The system will leverage the turbine structure's existing electrical connections and platform in order to provide a "shore power" connection for battery-equipped service vessels. When an electric crew transfer vessel (CTV) "docks" with the turbine, a cable reel will lower down a cable that will plug in to the vessel and charge the battery on board. The objective is to increase the operational range of electric CTVs, improving their utility and encouraging greater uptake in the offshore wind industry.

The basic technology necessary for this initiative is comparable to existing maritime-industry equipment, like shore power connections and the hose reel arrangements for FPSO-to-tanker transfers at sea. However, this particular application has never been tried before, and the partners will develop the standards and procedures necessary to ensure its safe operation.

Maersk Supply Service is pursuing a comparable concept based on a tethered charging buoy - the electrical equivalent of a single-point mooring (SPM) tanker terminal. Its new "Stillstrom" division aims to test a buoy large enough to charge a service and operations vessel (SOV) by the third quarter of 2022. Stillstrom plans to donate the intellectual property for the system to the rest of the maritime industry in order to encourage uptake. 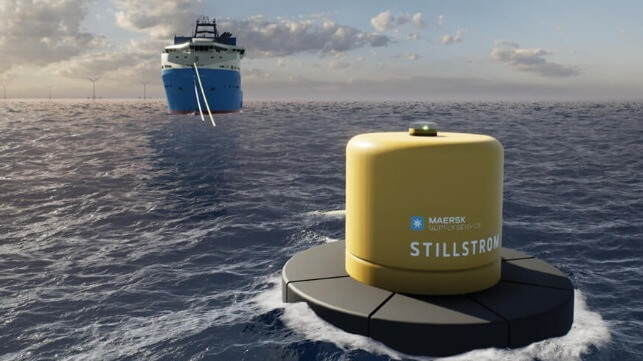 "The offshore wind industry is expanding and the increase of electrical charging points for offshore support vessels will encourage vessel owners to also switch to fully electric or hybrid vessels," commented Antonia Panayides, transportation partner at law firm Reed Smith. "By 2028, the global electric ships market is set to be worth $ 7.76 billion. With increased regulation facing the shipping industry such as the International Maritime Organisation setting a 2030 target for emissions reductions and net-zero CO2 emissions by 2050, we expect growth in electric vessels and offshore charging points with a view to participating in cleaner and greener shipping."