British authorities yesterday detained a superyacht believed to be owned by a Russian oligarch before it could slip away after a London yacht event. It marketed the first such detention carried out by the UK following similar actions by Europeans including France, Germany, and Italy.

The vessel is the 192-foot motor yacht Phi that was built by Royal Huisman in the Netherlands and completed late last year. According to the shipyard, it is not only the third-largest yacht they had ever built but it was developed and constructed below 500 GT making it by far the longest motor yacht in this category, based on current classification rules.

The UK’s Transport Secretary Grant Shapps told the Guardian newspaper, “Detaining the Phi, proves, yet again, that we can and will take the strongest possible action against those seeking to benefit from Russian connections. Now the ship is being held, it won’t be going anywhere … it’s just another indication that we will not stand by whilst Putin’s cronies are allowed to sail around the world in these kinds of yachts and people in Ukraine are suffering.”

Shapps said that his Department for Transport worked closely with the National Crime Agency and Border Force’s Maritime Investigation Bureau to intercept this superyacht, which is valued at nearly $50 million. They declined to name the suspected Russian oligarch that owned the vessel explaining that the law only required it to be linked to Russia for it to be detained. 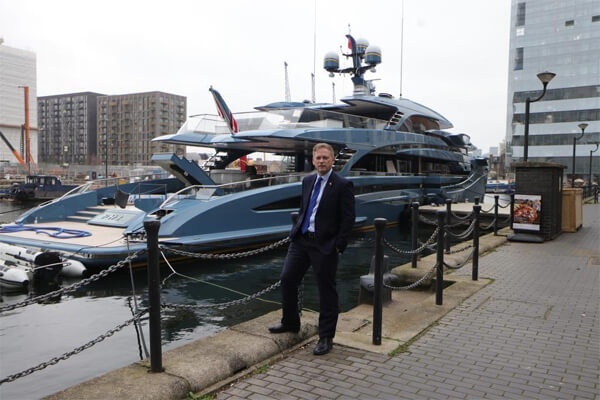 According to the shipyard, the vessel was designed with a “Fast Displacement XL hull form” that allows the yacht to be long and sleek, yet remain under the 500 GT mark. Built of aluminum, it has a unique low profile and reportedly a maximum speed of 22 knots. It has accommodations for two owners, along with 10 guests and 11 crew. Materials from the builders reported its amenities include an “infinite wine cellar” and a fresh-water swimming pool.

The yacht was in London according to the Guardian for a World Superyacht Awards event on Monday. It was expected to sail on Tuesday increasing the urgency for British officials to act. It was designed to travel with an accompanying “shadow vessel,” which apparently was not in London and not detained.

The Department for Transport, according to the Guardian, is also investigating a number of other vessels for suspected ties to Russia.