Imports at major retail container ports in the U.S. are expected to continue at near-record levels this month and the remainder of the year despite a new round of tariffs on goods from China, according to the monthly Global Port Tracker report released by the National Retail Federation and Hackett Associates.

Last week, President Donald Trump announced that new 10 percent tariffs on an additional $300 billion in Chinese goods will take effect on September 1. Coupled with 25 percent tariffs imposed on $250 billion worth of imports over the past year, the new round will tax almost all goods the U.S. imports from China.

Hackett Associates Founder Ben Hackett said the 10 percent tariffs would not likely have an immediate impact on import volumes, but an increase to 25 percent – as happened earlier this year with the most recent previous round of tariffs – would have a significant impact.

U.S. ports covered by Global Port Tracker handled 1.8 million TEUs in June, the latest month for which after-the-fact numbers are available. That was down 2.9 percent from May and down three percent year-over-year.

The August and October numbers would be the highest monthly volumes since 1.96 million TEUs last December, tying for the third-highest month on record behind that and the all-time record of two billion TEUs set last October. While imports will decline year-over-year most months during the remainder of this year, that is largely because of high volumes seen last year as retailers rushed to bring in merchandise ahead of scheduled tariff increases.

Meanwhile, America’s tariff bill continues to grow. According to data released this week by the Tariffs Hurt the Heartland coalition, American importers paid $6 billion in tariffs in June, one of the highest-tariffed months in U.S. history and up 74 percent from the same month last year. The data, compiled from the U.S. Census Bureau, is the first look at the impact of the escalation of tariffs on $200 billion of Chinese goods from 10 to 25 percent in May. 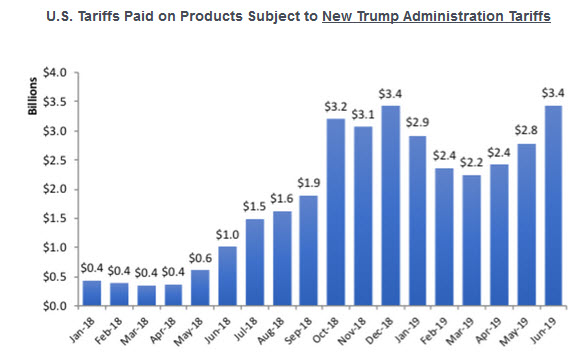 U.S. taxpayers have paid over $27 billion in extra import tariffs from the beginning of the trade war in 2018 through June of this year, according to an analysis of U.S. Census Bureau data. The overwhelming majority — nearly 75 percent — of those tariffs are due to the China 301 tariff actions. In fact, June saw a marked increase in tariff totals despite the fact that steel and aluminum tariffs on Canada and Mexico were removed.

U.S. imports in June for the $300 billion tranche (List 4) of goods that President Trump has said will face 10 percent tariffs starting on September 1 were over $23 billion. That is over $6 billion more than the $17 billion in June imports subject to China Section 301, Section 232 steel and aluminum, and Section 201 washing machine and solar panels tariffs combined. 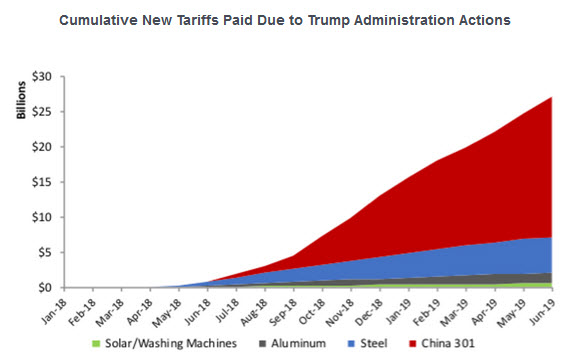 Retaliatory tariffs imposed by China resulted in a 17 percent drop in U.S. exports for products that have been targeted. June was the 11th straight month that American exports targeted for retaliation declined by more than 15 percent, says Tariffs Hurt the Heartland, and China has threatened further retaliation on the newly announced tariffs. U.S. imports from China subject to 301 tariffs declined by $20.9 billion (-9 percent) in the 12 months through June 2019. U.S. exports to China subject to 301 retaliation declined by $24.5 billion (-29 percent) over the same period.

The Global Port Tracker covers the U.S. ports of Los Angeles/Long Beach, Oakland, Seattle and Tacoma on the West Coast; New York/New Jersey, Port of Virginia, Charleston, Savannah, Port Everglades, Miami and Jacksonville on the East Coast and Houston on the Gulf Coast.

The recognized government of Yemen and an array of civil society groups are adding their voices to the call to salvage and remove the FSO Safer, a decaying single-hull tanker that has been storing the same cargo of crude oil in her tanks since the start of the Yemeni civil war. The 1976-built Safer has been inactive and unmaintained since the outbreak of Yemen's civil war in 2015, and she is believed to have a cargo of about one million...