U.S. Marks the 100th Anniversary of the Tomb of the Unknown Soldier

Every November 11, veterans, active duty servicemembers and civilians gather at Arlington National Ceremony to honor those who have died in service to their country. This year, in addition to flags and wreaths, the armed forces commemorated the 100th anniversary of Arlington's Tomb of the Unknown Soldier - a symbol of all American servicemembers who have fallen in battle.

In 1921, three years after the end of the First World War, Congress approved a measure to repatriate and rebury one unknown soldier from American cemeteries in France. The unknown would serve as a symbol of sacrifice in the "war to end all wars," which cost about 100,000 American lives. A distinguished veteran of the war, U.S. Army Sgt. Edward F. Younger, made the final selection at the military cemetery at Chalons-sur-Marne. The casket was carried out for transport to Le Havre, where it was loaded aboard the U.S. Navy cruiser USS Olympia for its journey to the United States.

It was one of Olympia's last voyages in military service, and it was a difficult crossing. She departed Le Havre on October 25, 1921, headed for the Washington Navy Yard. For most of the voyage, she weathered tropical storm-force winds and 20-30 foot seas, the remnants of two Atlantic hurricanes. At one point in the voyage, the commanding officer asked the ship's chaplain to gather the off-duty crew and pray for deliverance from the storm. The precious cargo was stowed on the weather deck, lashed down with rope and canvas, and a Marine Corps guard detachment stood watch in all conditions to ensure that it didn't break loose in the heavy rolling.

Thanks to the heroic efforts of the crew, the cruiser and her cargo arrived safely at the Washington Navy Yard on November 9, 1921. Top military and civilian leaders - Gen. John J. Pershing, Gen. John. A. Lejeune, Secretary of War John W. Weeks and others - were at the gangway as the casket was carried down and loaded onto a carriage. It was taken to the U.S. Capitol Rotunda, where it lay in state for three days.

On November 11, the unknown soldier was given a state funeral and laid to rest at the newly-created memorial at Arlington National Cemetery. Inscribed on the back of the Tomb were the words: Here rests in honored glory an American soldier known but to God. 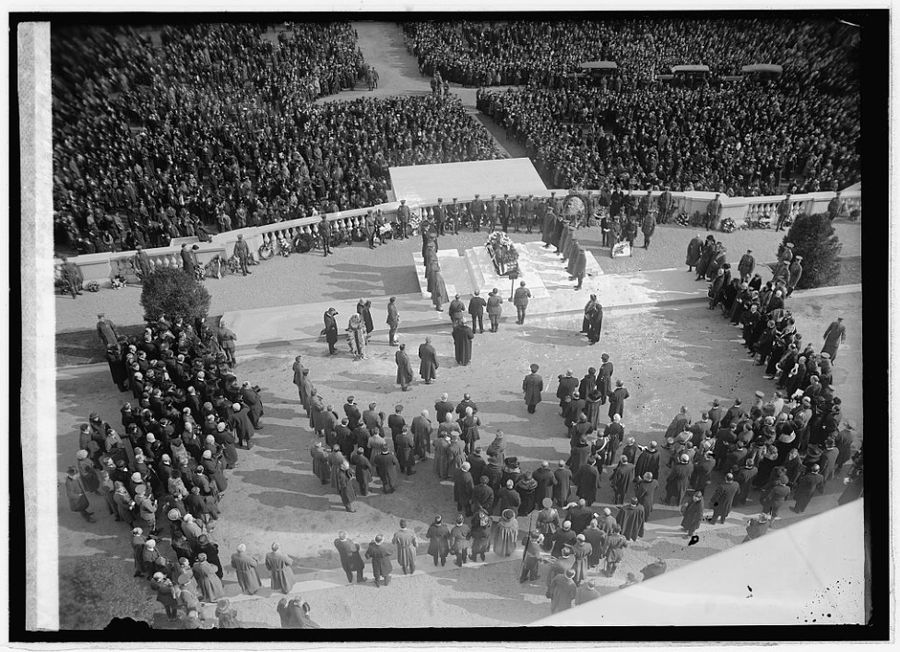 After each major conflict, more unknown soldiers have joined the site. To the west of the sarcophagus are the crypts of unknowns from World War II, the Korean War and Vietnam. These three graves are marked with white marble slabs, flush with the plaza.

The site is usually closed to all but the Army servicemembers who guard it. On November 9 and 10, for the first time in nearly 100 years, the public was allowed to walk up to the Tomb of the Unknown and place flowers. 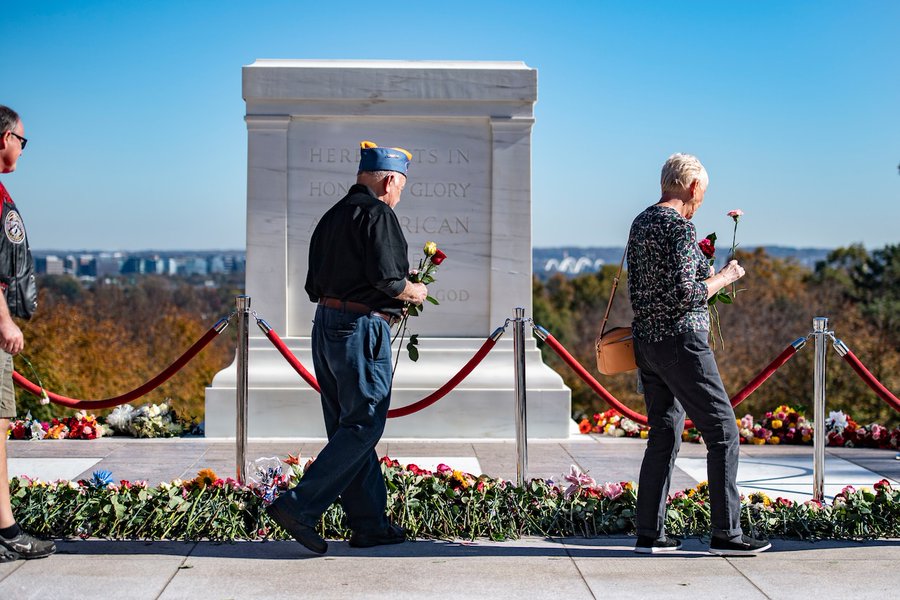 Veterans and members of the public lay flowers at the Tomb of the Unknown Soldier for the first time in a century (Courtesy U.S. Army)

On Thursday, the 100th anniversary of the tomb's creation, the armed forces conducted a full honors procession, meant to represent parts of the World War I Unknown Soldier’s 1921 funeral procession. It was accompanied by a joint service flyover with aircraft from all branches of the military.

In a ceremony to mark the occasion, President Joe Biden placed a wreath at the tomb and thanked veterans for their service.

"Each of our veterans is a link in a proud chain of patriots that has stood in the defense of our country from Bunker Hill to Belleau Woods, Gettysburg to Iwo Jima, the Chosin Reservoir to the Kunar Valley," he said. "Each understood the price of freedom, and each shouldered that burden on our behalf. Our veterans represent the best of America."