The U.N. Sustainable Development Goals (SDGs) can only be met by 2030 if there is political will to change the rules of international economics and adopt policies that scale up the resources needed for a big investment push led by the public sector, says UNCTAD’s Trade and Development Report 2019, launched this week.

The report recasts the Depression era’s signature policy on a global scale – a Global Green New Deal – as the right policy framework to make a clean break with years of austerity and insecurity following the global financial crisis.

“The global economy does not serve all people equally. Under the current configuration of policies, rules, market dynamics and corporate power, economic gaps are likely to increase and environmental degradation intensify,” said Richard Kozul-Wright, director of UNCTAD’s division responsible for the report.

Decarbonizing the global economy will require a significant rise in public investment especially in clean transport, energy and food systems, he says. This will need to be supported by effective industrial policies, with targeted subsidies, tax incentives, loans and guarantees, as well as accelerated investments in research, development and technology adaptation.

The report argues for a new generation of trade and investment agreements to support these policies along with changes to intellectual property and licensing laws. But more specific measures and dedicated financial support will be required in developing countries to help them leapfrog carbon-intensive development paths.

The report sets out a roadmap that can lead to growth rates of GDP in developed economies of one to 1.5 percent above those generated by current patterns of global demand. For developing economies, excluding China, the gains will be larger, ranging between 1.5 and two percent per annum, but more moderate in China.

Projecting an annual increase in total green investment of two percent of global output - around $1.7 trillion or just one third of what is currently spent by governments on subsidizing fossil fuels – could, UNCTAD economists estimate, generate a net increase in global employment of at least 170 million jobs, with an overall reduction in carbon emissions by the target year of the 2030 Agenda.

But the report also contends that widening the investment challenge to eradicate poverty and meet nutrition, health and education goals will impose unsustainable financial burdens on many developing countries, requiring deeper reforms to the international trade, financial and monetary system if the 2030 Agenda is to be met on time.

Since the global financial crisis, market-friendly solutions to these global challenges have failed to push economies in a more economically, socially and environmentally sustainable direction. This year’s report casts doubt on proposals to do more of the same: to finance the SDGs by maximizing development finance through blending public and private sources using products and techniques taken from the playbook of banking conglomerates. These have routinely failed to boost productive investment and were instrumental in the boom-bust cycle that led to the 2008 global financial crisis.

Instead, the report sets out a series of measures and reforms that would give the lead in financing a Global Green New Deal to the public sector and calls on the international community to find the political will to advance such an agenda.

The report says that reversing the decades-long loss of labor income to profits and the shrinking public realm and ensuring corporations pay their fair share (Figure 1) is key for the global package to work, due to the positive effect of increased public investment and higher wages on consumption and private investment. 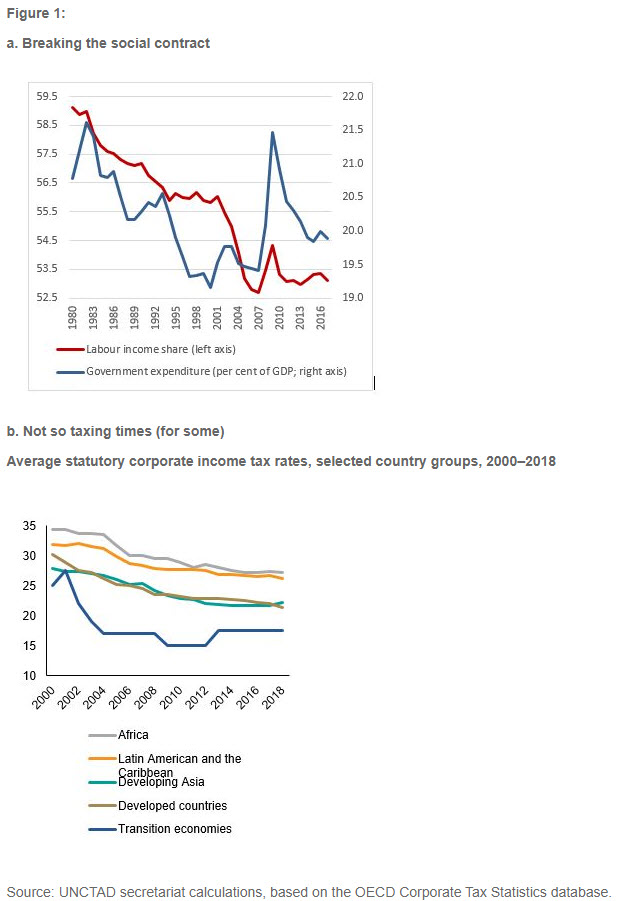 The appropriate policy package will vary from country to country, but all will involve fiscal stimulus, public investment in infrastructure and green energy, and measures to boost wages (Figure 2). 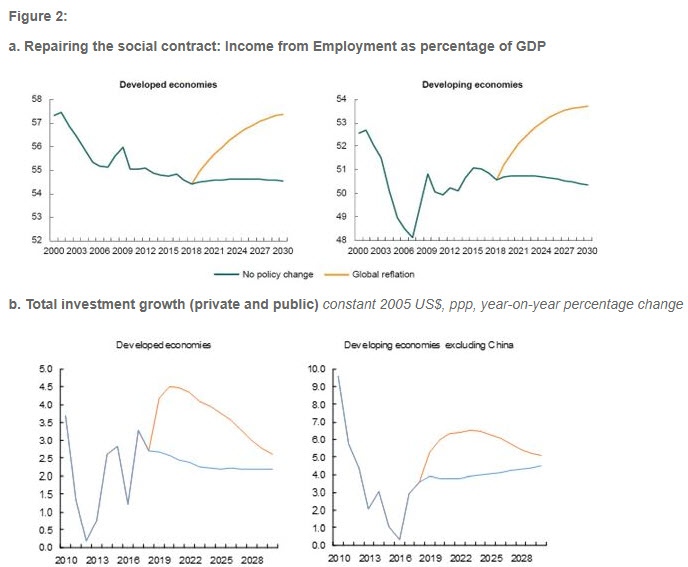 According to Mukhisa Kituyi, UNCTAD’s Secretary-General, “meeting the financing demands of the Agenda 2030 requires rebuilding multilateralism around the idea of a Global Green New Deal, and by implication a financial future very different from the recent past.” The report proposes a series of reform measures to make debt, capital and banks work for development, including:

•  An expanded role for special drawing rights as a flexible and scalable financing mechanism that goes beyond liquidity provisioning to support long-standing calls for a global environmental protection fund providing predictable and stable emergency funding without strict policy conditionalities or limiting eligibility criteria.

•  A global sustainable development fund capitalized and replenished by donor countries paying in their unfulfilled commitments to the official development assistance target of 0.7 percent of gross national income and providing dedicated resources to compensate for what was only partially delivered over past decades (estimated at over $3.5 trillion since 1990)

•  A rules-based framework to facilitate an orderly and equitable restructuring of sovereign debt that can no longer be serviced according to the original contract, governed by a set of agreed principles and body of international law.

•  Curtailing tax-motivated illicit financial flows through a unitary taxation system that recognizes that the profits of multinational enterprises (MNEs) are generated collectively at the group level and combined with a global minimum effective corporate tax rate on all MNE profits set at around 20 percent to 25 percent, which is the average of current nominal rates across the world.

•  Making capital controls a permanent policy tool while keeping capital-account management out of the purview of regional and bilateral trade and investment agreements but providing multilateral coordination and oversight, including of capital outflows from developed countries.

•  A network of leading central banks to aggressively promote climate financing by moving away from a narrow focus on price stability and inflation targeting and to backstop support for green finance in dedicated public banks and through more general guidance mechanisms, such as quantitative easing.

•  Giving development and other public banks more capital so that they can scale up finance for development; directing resources of sovereign wealth funds, whose assets under management have reached $7.9 trillion, towards developmental needs, including through supporting development banks; coordination of the new generation of south banks to establish stronger south-south financing ties.

Despite the presence of a grounded offshore rig in the Sabine Bank Channel, LNG carriers are still transiting to and from Cheniere's Sabine Pass LNG liquefaction terminal, AIS data shows.  Tracking data indicates that the LNG carrier Arctic Discoverer transited through the channel on Wednesday night, mooring alongside at the terminal's wharf towards midnight local time. The LNG carriers Palu LNG and Stena Clear Sky have also called at the facility over the course of the past week, according to...