The U.S. National Transportation Safety Board has released an investigation report into the sinking of the commercial fishing vessel Langley Douglas in September 2017, noting the presence of a 25-foot basking shark in the catch and the captain's subsequent decision making.

The 79-foot-long, 143-gross ton vessel developed a port list, capsized and subsequently sank 60 miles east of Cape Charles, Virginia. A U.S. Coast Guard helicopter rescued the five people on board. No injuries or pollution were reported. The Langley Douglas was valued at $1.95 million.

The National Transportation Safety Board determined that the probable cause of the capsizing and sinking of fishing vessel was the captain’s decision to unload a large catch that overflowed the pen and spilled out on deck, which, coupled with trapped water on deck due to blocked freeing ports and shifting of liquids in partially filled tanks, caused the vessel to roll to port and downflood. 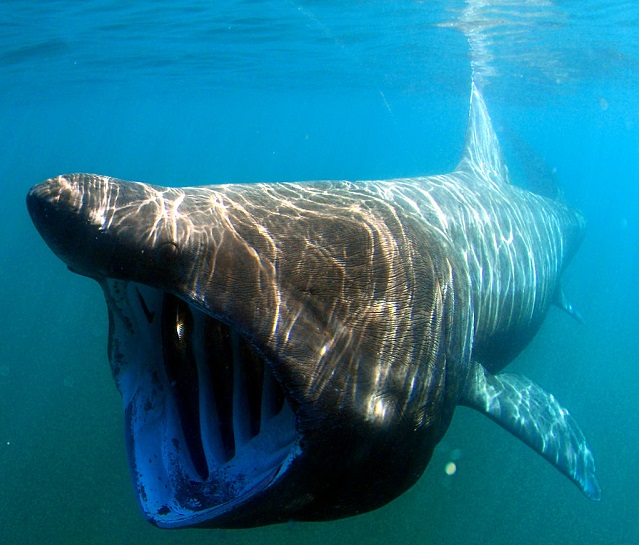 File photo of a basking shark

Edited Excerpt From the Report

At 0910 on September 11, 2017, the captain ordered the crew to haul in the net and prepare the main deck and hog pen area. The crew also placed scupper plates in front of the port and starboard freeing ports to prevent catch from going overboard. The captain told investigators that he remembered seeing the cod-end sensor flashing, indicating that catch was present in the net. As the net approached the stern, the crew noticed a 25-foot-long basking shark stuck in the cod end. The first mate stated that he knew the catch was large and heavy because the hydraulic winches were “a bit under pressure,” but the crewmembers brought the entire catch on board and emptied the net into the centerline hog pen. They estimated that the total catch weighed about 35,000 pounds (the shark about 10,000 pounds).

The crew planned to remove the shark from the vessel using the centerline boom (the NOAA observer said the shark had likely died in the net). However, after the crew discharged the shark and squid into the hog pen, the squid started to overflow the pen and spill out onto the port side of the deck, and the vessel immediately developed a port list.

In addition, the vessel was beam to the six to eight-foot seas and taking waves over its port quarter, which the crew said further increased the list. Normally, the crew would open fish hatches on both the port and starboard side to distribute the squid evenly into the fish holds, but to try to counter the port list, the captain ordered the crew to open the hatches to the two forward starboard fish holds and commence sweeping (with brooms) the squid from the pen into those holds. Despite this, the vessel continued to take seas over its port.

The vessel now listed about 10–20 degrees and the port quarter of the vessel was submerged as waves continued to break over the bulwark. This caused the body of the shark to shift to the port side of the hog pen and about 2,500 pounds of squid to slide toward the stern and collect against the aft portside bulwark, blocking the freeing ports and preventing release of trapped seawater on deck.

The captain raised the vessel’s portside paravane out of the water, altered course to port, and gave full throttle to try to counter the list, to no avail. The captain then instructed the crew to come up from the main deck as he proceeded to grab immersion suits that were stored in the wheelhouse. He instructed the crew to don their suits; however, the rough seas and continuously increasing port list made it difficult for the crew to don the suits on board. The first mate went forward to manually launch the liferaft located on the bow.

As the Langley Douglas continued taking seas over the port side, the shark rolled out of the hog pen and slid toward the portside bulwark. Eventually, the vessel listed 45–60 degrees and then rolled completely onto its port side (80–90 degrees by the captain’s account). Seawater entered the vessel through downflooding points on deck and in the wheelhouse, resulting in loss of electrical power. Shortly thereafter, the vessel began to sink by its stern.

The five people on board the Langley Douglas entered the 70-degree water while holding on to their immersion suits. The captain grabbed the sea anchor of the deployed liferaft. The NOAA observer and the senior deckhand swam away from the sinking vessel off its port quarter. When safely away from the vessel, they donned their immersion suits in the water and then grabbed hold of a floating cooler that had previously been located on deck.

By 1246, the helicopter crew had hoisted all five people to safety and then flew them to Elizabeth City.