The death toll after the Tianjin port explosions last week has risen to 114.

Local officials report that 54 bodies have been identified and another 70 people are still missing. So far, 39 of the dead have been confirmed as fire fighters and five policemen.

As of Monday, 698 people are in hospital, 57 of them in critical condition.

Rescuers have carried out comprehensive searches through what they called "a maze of containers," and search and rescue efforts are still under way. 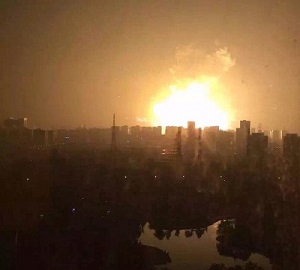 A Series of Explosions

The Tianjin explosions were a series of explosions that occurred at a container storage station at the Port of Tianjin starting on Wednesday, August 12. The first two explosions occurred within 30 seconds of each other, and they were followed by another eight on August 15.

The International Union of Marine Insurance (IUMI) says it is far too early to speculate on the cause of the explosions which have left extensive physical damage as well as an appalling loss of life.

IUMI President, Dieter Berg says: “This extremely sad and regrettable incident demonstrates the persistent growth of accumulation of values in port and storage areas, particularly in highly industrialized regions. Recent examples include the floods in Thailand in 2011 and Hurricane Sandy on the East Coast of the United States in 2012 that caused the biggest marine cat loss ever.” 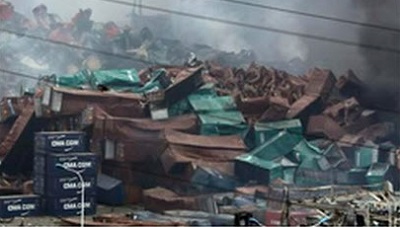 Berg continues: “Although we are focusing on losses caused by natural hazards such as flooding or hail, it is human error that is often to blame, particularly around industrial facilities. Man-made losses or damage caused by explosions are hard to model but they are comparable with acts of terrorism. To evaluate worst case scenarios we need to fully understand the value of the goods in the port and all potential exposures before we can calculate adequate premiums. This is becoming more of a challenge as these facilities continue to expand.”

Early reports from Lloyd’s Agency Network state that more than 10,000 motor vehicles were destroyed at Tianjin.

Nick Derrick, Chairman of IUMI’s Cargo Committee said: “With average retail values of $30,000 this could result in a loss of $300 million for vehicles alone. Container losses are likely to be spread among many marine cargo insurers, but motor vehicle insurance is a specialist sector and so that market is likely to be hit hard.”