In a show of force, the UK Royal Navy carrier HMS Queen Elizabeth joined forces from the United States, Japan and the Netherlands for a large-scale exercise in the Philippine Sea sending an unmistakable message for Chinese decisionmakers amidst tensions over disputed maritime claims.

Several US Navy sailors joined the Queen Elizabeth's crew for the exercise, while the Type 45 destroyer HMS Defender temporarily transferred to the command of the American task group. Aviation assets from the carrier transited back and forth to the other vessels, exercising joint flight ops (and formally marking the operation as a military exercise, not just a formation sailing).

The first two days of the operation also saw HMS Defender, HMS Kent and HNLMS Evertsen carrying out gunnery training in waters near to an uninhabited tropical island, working closely with the 31st Marine Expeditionary Unit of the US Marine Corps.

During this phase, an F-35B from Queen Elizabeth landed on USS America to load ordnance, refuel and continue on its strike mission, while Defender received supplies and stores from USS America – possibly the first time a British warship has carried out underway replenishment with an American amphib. 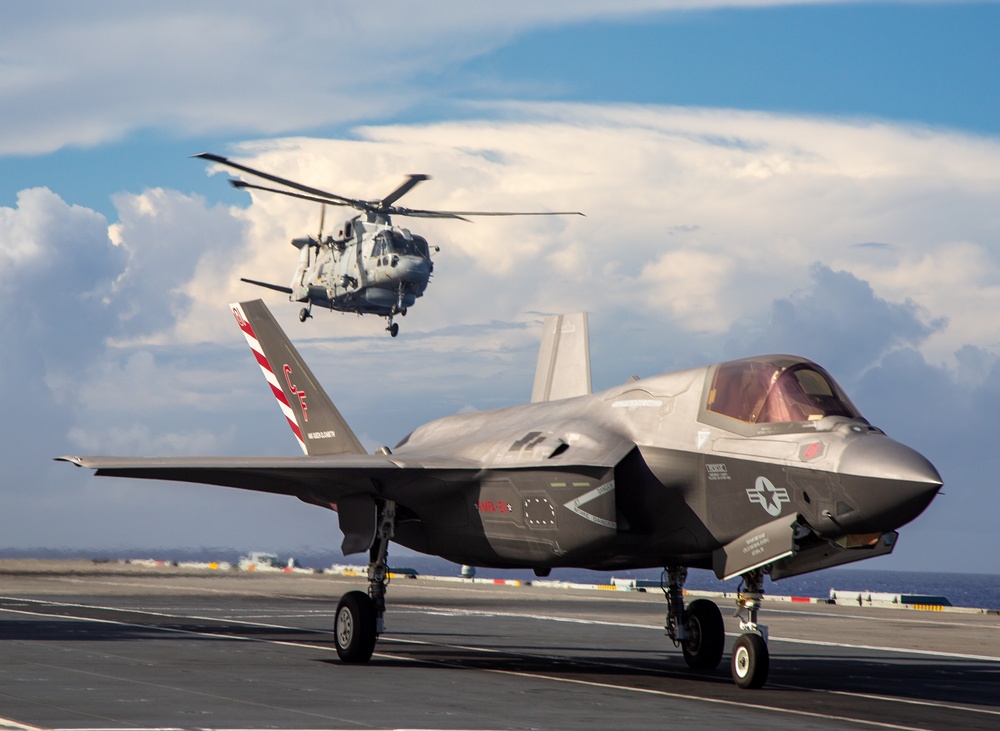 U.S. Marine Corps Maj. Brian Kimmins prepares to launch an F-35B from HMS Queen Elizabeth for a historic cross-deck operation with USS America in the Pacific Ocean on August 20, 2021 (USN)

“By conducting this joint exercise we have demonstrated the UK’s commitment to the Indo-Pacific – an area critical to global peace and prosperity – and the Royal Navy’s flexibility and ability to work with the UK’s allies and partners in the region," said the CO of HMS Defender, Commander Vince Owen.

The Royal Navy patrol ships HMS Tamar and HMS Spey are due to deploy to the region soon on a long-term mission, maintaining UK presence after Queen Elizabeth departs.

When asked about the joint exercise at a press conference Wednesday, Chinese Foreign Ministry spokesman Wang Wenbin expressed ambivalence. "We noted relevant reports. China always holds that military cooperation between countries should not undermine regional peace and stability, or the interests of a third party," he said. ss