The third new ferry being built for the New York City Department of Transportation was recently launched at the Eastern Shipbuilding Group’s Allanton facility in Panama City, Florida. Named the Dorothy Day in honor of a social activist and journalist who spent decades representing the Staten Island community, the vessel is part of a $300 million investment to bring larger and more state-of-the-art ferries into service connecting Staten Island to lower Manhattan. The first new boats added to the fleet since 2006, the three vessels were funded with a combination of federal, city, and other grants.

Congresswoman Nicole Malliotakis, who was elected to represent New York's Eleventh Congressional District which is on State Island, served as the ship’s sponsor and broke the ceremonial bottle of champagne over the bow. She noted the key role the ferries play in New York, saying, "For more than 200 years, the Staten Island Ferry has been a symbol of New York City's harbor and an integral part of our city's transportation system."

The vessel is the third to be built by Eastern Shipbuilding in the “Ollis Class” named after a fallen soldier of the US Army 10th Mountain Division at Fort Drum. Army Staff Sgt. Michael H. Ollis was a Staten Island native killed in Afghanistan on August 28, 2013. The first of the series, Hull 219, is named in his honor. "Staff Sgt. Michael Ollis is our hometown hero who bravely gave his life for our nation. His name is one that all Staten Islanders can be proud of as they view the best sites New York City has to offer," Malliotakis added,

Designed by Elliott Bay Design Group, Seattle, Washington, the three ferries feature a traditional New York design, double-ended, and painted in the traditional orange color of the ferries. Each has an overall length of 320 feet and a beam of 70 feet. The three ferries in the Ollis class will be larger, reflect modern technology, and will operate more safely in extreme weather conditions. They will feature popular design elements of past Staten Island Ferries, including more comfortable seating and phone-charging outlets, as well as an oval upper-deck promenade that will for the first time serve as an outdoor walking track for ferry riders.

Within days Eastern began rebuilding and within weeks the shipyard restarted production on its existing contracts, most notable of which being the Staten Island Ollis Class Ferries and the USCG Offshore Patrol Cutter. According to the shipyard, while not complete, the rapid recovery to date is a testament to Eastern’s commitment to the Staten Island Ferry program, the USCG OPC program, and its other valued customers.

After delays caused by the hurricanes on Florida’s Gulf Coast, the first new ferry boat, the Staff Sergeant Michael H. Ollis, is expected to arrive in New York harbor in June and following extensive preparation and staff training, is scheduled to begin regular passenger service in November 2021.

The second boat in the Ollis class, the Sandy Ground, honors one of the nation’s first Black settlements and a stop on the “underground railroad,” which was located on Staten Island’s South Shore. This vessel is expected to arrive in New York in December 2021 and begin regular passenger service in 2022. The Dorothy Day is also scheduled to arrive in New York before the end of 2022. 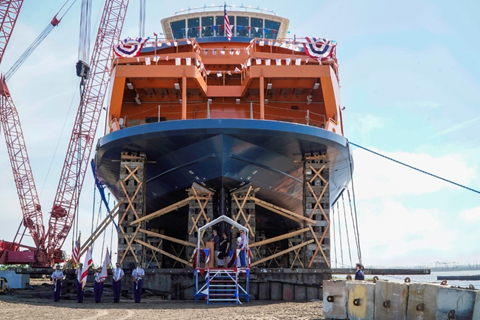 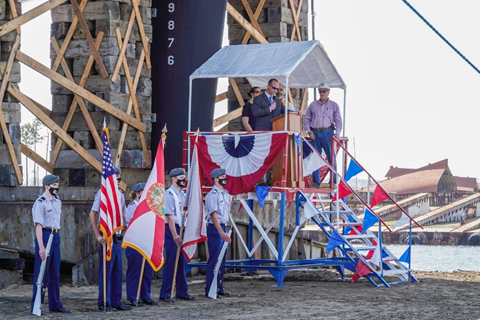