The U.S. Energy Revolution and the Saudi Attack

Dr. Dean Foreman, the American Petroleum Institute's chief economist, says the U.S.' energy revolution has changed the impact of the attack on Saudi Arabia's oil processing facilities over the weekend.

He says the U.S. energy revolution has effectively provided spare oil production capacity to the world, and it has shortened the time between initial drilling and delivery to market to days or weeks versus months or years, as in the past.

“This past weekend, the revelation that significant Saudi Arabian production capacity was lost was almost immediately offset in part by efforts to soothe global markets – first by the Saudis announcing they would bring additional offshore production capacity to market, and second by the Trump Administration indicating it would release an undetermined amount of the U.S. strategic petroleum reserve (SPR). Russia has reassured markets over inventories and supplies. Europe and China could follow suit and leverage their petroleum reserves. China, in particular, may need to resume purchases of U.S. crude oil that it stopped amid to the trade war with the U.S.”

That global oil consumers turn to the U.S. for reliable supplies is a significant development from the U.S. energy revolution, says Foreman. “As API’s Monthly Statistical Report for August (to be released Sept. 19) shows, U.S. oil production set new records at 12.3 million barrels per day (mb/d) for crude oil and an additional 4.8 mb/d of natural gas liquids. For a second year in a row, the U.S. has supplied virtually all global growth in oil demand – and now can backstop global oil markets during a potential crisis.”

The chart below shows the historical relationship that has shifted over time, before and after the U.S. energy revolution. From 1990 until 2008, before major market effects of the then-nascent U.S. energy revolution could take hold, there was a general pattern where lower OPEC spare capacity corresponded with higher prices, and vice versa. 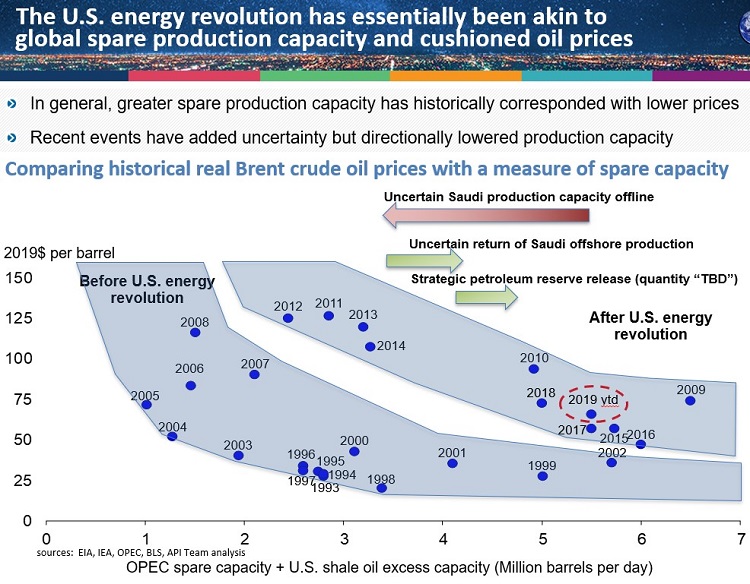 “As we have seen, the world can change almost overnight. It was just 10 short years ago when an oil price shock helped deepen the U.S. recession and a Democrat-led Congress lifted an offshore drilling moratorium. The fragility in the Middle East shows that those who say we can turn our back on American-produced energy are foolish and risk our economic and energy security. In reality, the U.S. should be looking to broaden offshore energy exploration to discover new resources, secure our energy future and strengthen our economy.

“While we pray for the safety and peace of the people of the Middle East, we must expand access to stable, homegrown energy for Americans.”

In Asia, Wood Mackenzie research director Vima Jayabalan notes that the Saudi Aramco processing centers hit by the attack, Abqaiq and Khurais, are the main processing centres for Saudi Arabia's Arab Extra Light and Arab Light crude oil. "China, South Korea, Japan and India are the biggest takers in Asia, with China and Japan leading the pack at an average of 900 – 1,100 kilo barrels per day each. India could be most exposed as its reserves are the least. China has SPR Strategic Petroleum Reserve (SPR) and commercial crude storage, while Korea and Japan have IEA reserves to fall back on.

"Collectively, Asian demand for Saudi Arabian crude is around five million barrels per day; accounting for almost 72 percent of Saudi Arabia's crude exports. Asian consumption of Arab Extra Light and Arab Light grades alone from the affected facilities varies between 2.5 and 2.7 million barrels per day seasonally. The region's dependence has increased significantly over the last 1.5 years.

"The impact and the next course of action will depend on the duration of the outage. Saudi Arabia has enough reserves to cover the shortfall over the next week, but if the outage extends, then filling the gap with the right type of crude quality could be a challenge. Moreover, OPEC+ output cut predominantly consists of medium and heavy sour crudes."

Jayabalan continues: "A prolonged outage and/or further upside above-ground risks in the near term could have an impact on the preparation ahead of the IMO marine bunker specifications change, but at the moment it is still early days to assess."