Texas officials are reporting that a passenger tour boat capsized on a popular recreational lake north of Houston on Saturday evening. A large rescue effort was undertaken by emergency teams as well as residents to retrieve the passengers from the water. One person, an 80-year-old man, was pronounced dead at a local hospital after having been pulled from the water.

The Montgomery Country Fire Department reported receiving several emergency calls at 8:00 p.m. on August 14 regarding a capsized vessel on Lake Conroe with multiple people in the water. Teams from the local fire departments, county constable, Texas Game Wardens, hospital district, and Lake Patrol all responded to the scene.

Upon arrival, the rescuers reported that a large number of passengers were still in the water with diesel fuel leaking from the vessel that was lying on its side partially submerged. Local neighbors had already responded and started rescuing people from their docks on the lake. Some of the residents also reportedly went into the water to help passengers to safety before rescue crews arrived at the site on the lake.

“Several Lake Patrol and Fire Crews who work the Lake year-round, and some for many years, have said they have never seen a scene this large on the lake,” the Montgomery Fire Department reported. 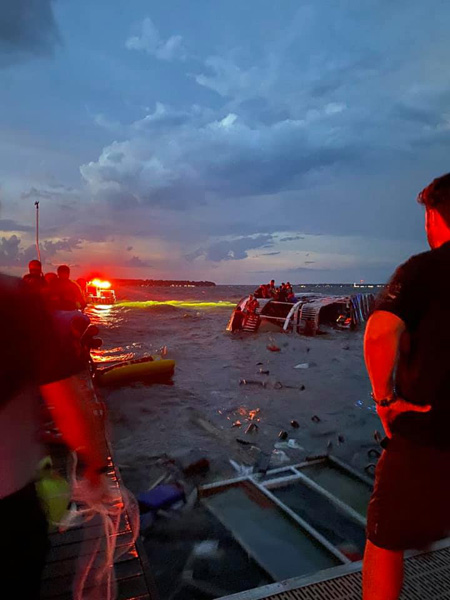 Rescue crews were able to get everyone out of the water. They reported that a total of 53 passengers and crew were rescued. Two people were taken to the hospital, with one reported to be in critical condition and the other in stable condition. An 80-year-old man, Karl Katzenberger of Montgomery, Texas, was the one in critical condition, and he was pronounced dead at the hospital.

The remaining passengers were all examined by medical personnel at the scene. Decontamination was also then done to get the diesel off the passengers before they were transported back to the starting point of the boat tour or other transportation agreements were made for them to return home.

News reports are indicated that there were heavy thunderstorms in the area of the lake at the time of the accident. Eyewitnesses told the local media that they had seen rough water on the lake at that time. “While weather is thought to be the cause of the capsizing, the exact cause has not been determined and the entire incident is under investigation,” reported the Montgomery Fire Department.

The Fire Department thanked everyone for their bravery and teamwork during a difficult situation “helping save so many from what could have been a complete disaster and a mass rescue operation didn’t turn into a mass casualty event.”

The area at the lake remains cordoned off as recovery crews get the boat out of the water and all the debris is removed. Located near Houston, Lake Conroe is a 22,000-acre lake with a total of 157 miles of shoreline.

The incident brought back memories of a 2018 accident when a duck boat operating on another lake sank near Branson, Missouri, killing 17 out of the 31 people on board and injuring seven. In that instance, the U.S. Coast Guard and National Transportation Board were involved in lengthy investigations, and the captain and two crew members were charged in July 2021 with first-degree involuntary manslaughter.