The Port of Gothenburg and Swedish tanker operator Terntank expect to make maritime and environmental history on Friday, February 11, when the company’s new product tanker, Tern Island, makes its maiden arrival at the port. It is expected to become the first tanker to perform zero-emissions port operations and demonstrate the combination of battery and shore power that is expected to become increasingly common in the future.

The newly built tanker is the first vessel of its kind equipped with a battery power system. The batteries will provide the power for maneuvering into the port and docking. Once at the dock, it will also become the first tanker to use shore power. The shore power connection was developed together with the Port of Gothenburg, which is said to be the first port in the world that can connect tankers to electricity.

Designed by Terntank and Kongsberg Maritime CM AS, the 15,000 dwt tanker was delivered on December 15, 2021, at China Merchants Jinling Shipyard, Yangzhou, Dingheng Co. The design incorporates numerous features to make it among the most environmentally sensitive and lowest emission vessels in operation. 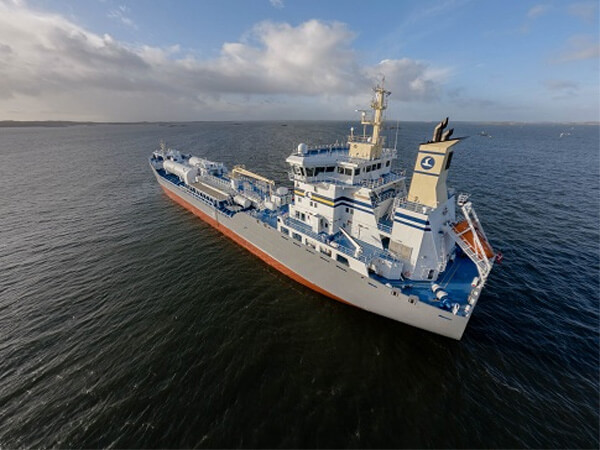 Enabling the zero-emission port operations, the vessel is equipped with an electric power supply hybrid system, including a battery pack, on-shore power supply, and a DC-Link system that is expected to be able to reduce its auxiliary energy consumption during port operations by 99 percent. The hybrid power system also enables peak shaving to further reduce emissions. The battery packs provide an energy reserve for power generation, limiting unnecessary parallel running of generators and providing a blackout prevention function that can keep the electrical network alive in an emergency.

The main engine, boiler, and auxiliary engine are also designed to reduce the environmental impact and perform safe operations running on biofuels. The vessel is outfitted with a dual-fuel powered engine that is 100 percent biofuel compatible with the company expecting to run Tern Island on liquefied biogas or liquefied natural gas. By combining an optimized hull and rudder design with the dual-fuel capability, when utilizing 30 percent biogas, Tern Island is expected to reduce emission by 70 percent of CO2 and almost eliminate the emissions of sulfur oxide (99 percent), particle emission (99 percent) and nitrogen oxide (97 percent) in comparison to a similar-sized conventional vessel.

With a length of 482 feet, the product tanker has a cargo capacity of 16,500 cubic meters in 14 epoxy-coated tanks. It will be commercially operated by the Finnish North European Oil Trade (NEOT) in the Baltic Sea area and will be included in a pool along with other vessels from Terntank.

The Tern Island will be joined by a sister ship also to be outfitted with the battery power system.  Terntank also has options to build two further ships as part of the 2019 construction contract.