The two other research vessels, the 500-ton New Ocean Researcher 2 and the New Ocean Researcher 3 were delivered to the government in 2019. The chairman of Taiwan Shipping Company, where the ships were built, Zheng Wen-lung highlighted that most of Taiwan's shipbuilding ships are commercial container ships or bulk carriers.

The construction of research ships was commissioned by the Ministry of Science and Technology and features several distinctive features. This ship is equipped with an energy-saving sword bow developed in Taiwan. The lateral appearance of the bow is different from the traditional bulbous bow. The design can reduce the wave resistance that lowers the ship’s speed in rough seas. The shape also reduces the chances of waves breaking over the bow. 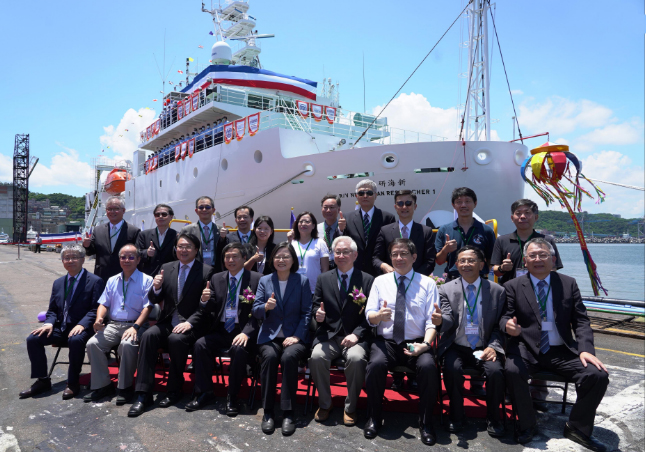 The New Ocean Researcher 1 was commissioned by the Ministry of Science and Technology and built by the Taiwan Shipping Company. The National Taiwan University will manage the operation of the vessel. The research ship is 2,200 gross tons. It has a length of 216 feet, a beam of 49 feet and a depth of 23 feet. It can carry a crew of 19 crew along with 28 researchers.

The ship is powered by electric propulsion, with precise positioning of multi-beam sounding, hydrological detection, and seawater sampling systems. The ship is equipped with a dynamic positioning system for fixed-point research at sea.

There also are advanced synchronous sonar detection equipment to assist in profiling the ocean currents, seabed topography and bottom structure, and a multi-beam echo sounder for large-area scanning of the seabed. The underwater positioning system can track a target of 5000 meters and can be assisted by the "Underwater Unmanned Vehicle (ROV)" and other related instruments to find objects such as the black box of the aircraft.

The New Ocean Researcher 1 is fitted with a broad range of scientific equipment for a broad range of research. It is also the only research ship equipped with a bow weather tower so that it can collect meteorological data and return it to the Meteorological Bureau’s researchers. To perform research on ocean currents the ship is equipped with high and low-frequency flow profilers and can also accurately and quickly survey and map 3D topographic maps of 7000 meters under the sea. It is also equipped with a dry and wet laboratory to perform various chemical and biological experiments.

Taiwan is also hopeful that the ship will serve as a reference vessel that will help it to win future international research ship construction projects.