Success and Failure for Asian Pirates in November

ReCAAP ISC reports that there were nine incidents of piracy and armed robbery against ships in Asia in November 2017. Of these, two were failed attempts. 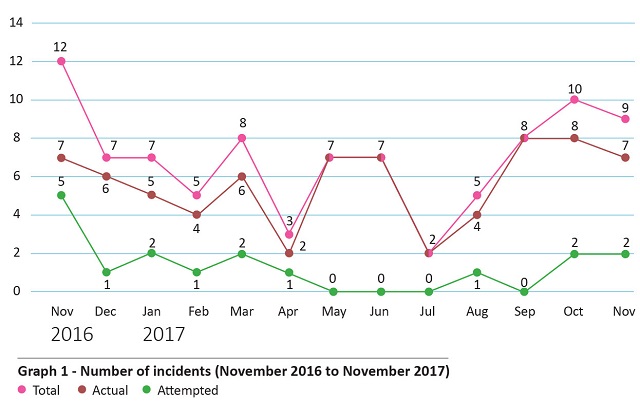 There was one case of theft of oil cargo in November: when the barge Ever Omega was under tow by the tug boat Ever Prosper off Singkawang, Indonesia. The barge was eventually recovered but her cargo of Crude Palm Kernel Oil was missing. At about 0400 hrs on November 22, a group of pirates armed with parangs (machetes) boarded the ships and tied up the crew. They took off with Ever Omega and six crew on board and left behind the Ever Prosper with four crew who later managed to free themselves.

The owner reported the incident to the ReCAAP ISC who informed the Malaysian Maritime Enforcement Agency (MMEA) and the Indonesian authorities. The MMEA despatched a boat from Sedili Maritime District in Johor to escort Ever Prosper to safety. The pirates had reportedly siphoned some fuel from the tug boat. On November 23, the Indonesian authorities found Ever Omega and towed her to Tanjung Pinang, Indonesia. All 10 crew was safe. Investigation is ongoing.

The incident was the second time that the Ever Prosper has been the target of theft of oil cargo. The first incident occurred on June 3, 2016 in the waters off Sarawak, East Malaysia.

The improvement of the situation during January-November 2017 was at ports and anchorages in India, Indonesia, Malaysia and Vietnam compared to the same period in 2016. However, there was an increase in the number of incidents reported at ports and anchorages in Bangladesh (Chittagong), Philippines (Manila and Batangas) and on ships while underway in the South China Sea and Straits of Malacca and Singapore compared to the same period in 2016. 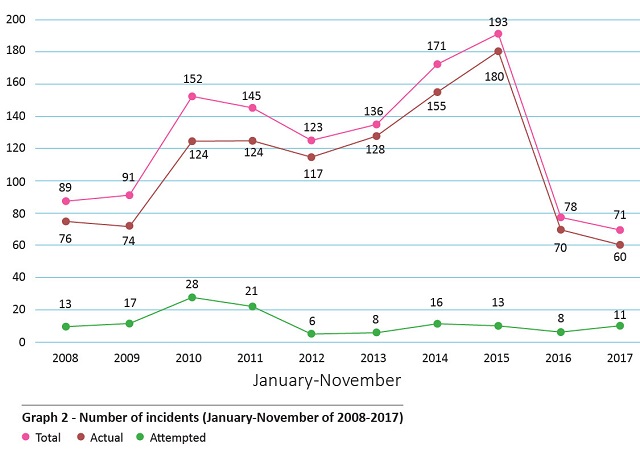 There was no report of incident involving the abduction of crew from ships while underway in the Sulu-Celebes Sea in November 2017. The last actual incident reported to the ReCAAP ISC occurred on board Super Shuttle Tug 1 on March 23; and the last attempted incident occurred on board Doña Annabel on April 18.

On November 10, Philippine troops rescued three living and one dead crewmen captured from the Giang Hai. The Vietnam-registered bulk carrier was boarded on February 19 in the Sulu Sea, and all six Vietnamese crew were abducted. One man was killed while underway, and another was found dead in July.

As of November 30, 10 crewmen remain in captivity. The Philippine authorities continued to conduct pursuit operations.

Plaquemines Port has signed a letter of intent with several potential partners to develop a new greenfield container terminal in Plaquemines Parish, Louisiana, about 50 miles inland from the U.S. Gulf of Mexico and 20 miles downriver from Port of New Orleans.  The plan calls for a 1,000-acre site - rivaling the Shanghai Yangshan complex in surface area - with 8,200 feet of frontage on the Mississippi River. The partners intend for the terminal to be powered by a combination of LNG...