A first-of-its-kind study led by the University of Western Australia into the ecological value of offshore infrastructure has revealed that subsea pipelines in north-west Australia provide safe havens for commercially important fish.

The study, published in Continental Shelf Research, was carried out by researchers from UWA’s Oceans Institute in collaboration with Woodside. It is the most extensive research published about fish on pipelines in Australia and one of only a few studies worldwide. 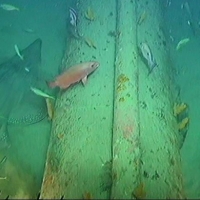 The team accessed video footage collected from remote operated vehicles (ROVs) used by industry to inspect and maintain underwater pipelines on the North West Shelf region of Western Australia. The ROV footage, collected along sections of pipelines at different depths, was used to assess the diversity and abundance of fish in the area.

In total, the team observed 5,962 individual fish from 92 species and 42 families.

Both the shallow and deep pipelines had a high abundance of commercially important fish, including snapper and grouper, as well as the presence of thousands of larval fish and juveniles suggesting the pipelines may actually enhance fish stocks.

The shallower pipeline was also characterized by a large diversity of sponges while the deeper pipeline included deep-water corals. Further, the unsupported sections of the pipelines appeared to support numerous species that likely use the areas as a refuge.

Lead author Dr Dianne McLean said these habitats seemed to offer a significant food source and refuge for fish and also for small mobile invertebrates that fish were feeding on.

“This suggests that subsea pipelines may have significant ecological and fisheries value and this should be considered in discussions about decommissioning offshore structures.”

Co-author Associate Professor Julian Partridge said collaboration with industry was vital to access data that could be used for ecological research.

“There is a lot of potential value locked up in industry ROV footage and our goal is to influence industry practice so that ROV videos used to maintain subsea pipelines are more useful for science,” Partridge said.