South African authorities are reporting the successful rescue of 62 seafarers that had been stranded on a remote South Atlantic island after their vessel sunk. Despite some additional drama with the weather in the area, everyone is reported to be safely aboard the rescue vessel which is now sailing to Cape Town after a brief stop in Tristan da Cunha.

The drama began on October 15, when the 1,500-ton fishing vessel Geo Searcher was operating in the water northwest of the remote Gough Island. The vessel was fishing and conducting surveys in the area. According to reports on the Tristan da Cunha website, the vessel struck a rock and began taking on water, which soon overwhelmed the pumps flooding the engine room.

With the vessel at a list of 45 degrees, the crew was ordered to abandon ship into several life rafts assisted by the Geo Searcher’s powerboats that were lobster fishing at the time. The rafts were towed to shore while the Geo Searcher sank.

The 62 crew members, including two that suffered minor injuries during the evacuation, spent four hours in the rafts before they were able to reach a bay along the rugged coastline of Gough Island. They had to be winched up a 150-foot cliff before they could make their way to a weather observation station, which is the only inhabitants on the remote island.

The South African Maritime Safety Authority was coordinating the rescue of the seafarers. A South African research vessel, the SA Agulhas II, equipped with two helicopters, was dispatched from Cape Town on October 17. The passage to Gough Island was expected to take approximately three days depending on sea conditions and weather in the area. 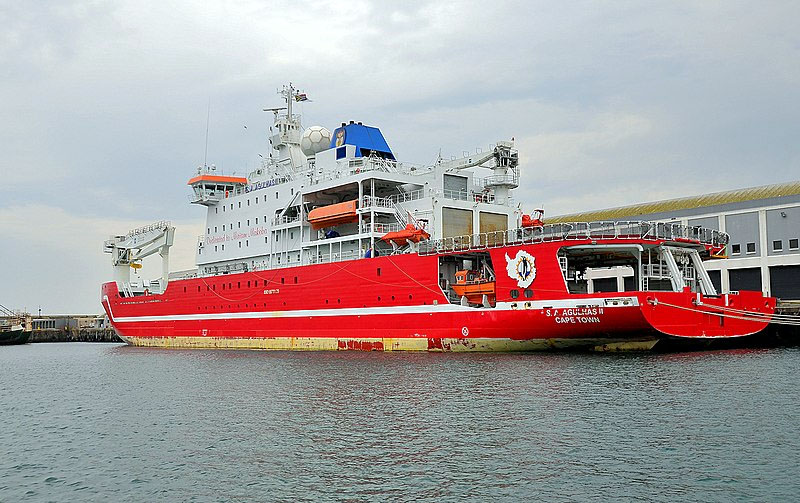 The vessel found itself battling “inclement weather with strong winds” according to SAMSA. Arriving at Gough Island on October 20, the rescue was also hampered by conditions in the area. “Bad weather with gale force winds has stalled the rescue operation since Tuesday, (October 20, 2020). Weather forecast for the coming 24 hours is also not looking any better, but is being closely monitored. The evacuation will commence as soon as the weather subsides,” said SAMSA in an update.

Weather conditions remained unfavorable for a transfer by boat from the island so it was determined that they would have to airlift all of the crew members from the Geo Searcher by the helicopters to the SA Agulhas II. SAMSA reported that the first flights to the island also could not land due to wind gusts up to 40 knots. 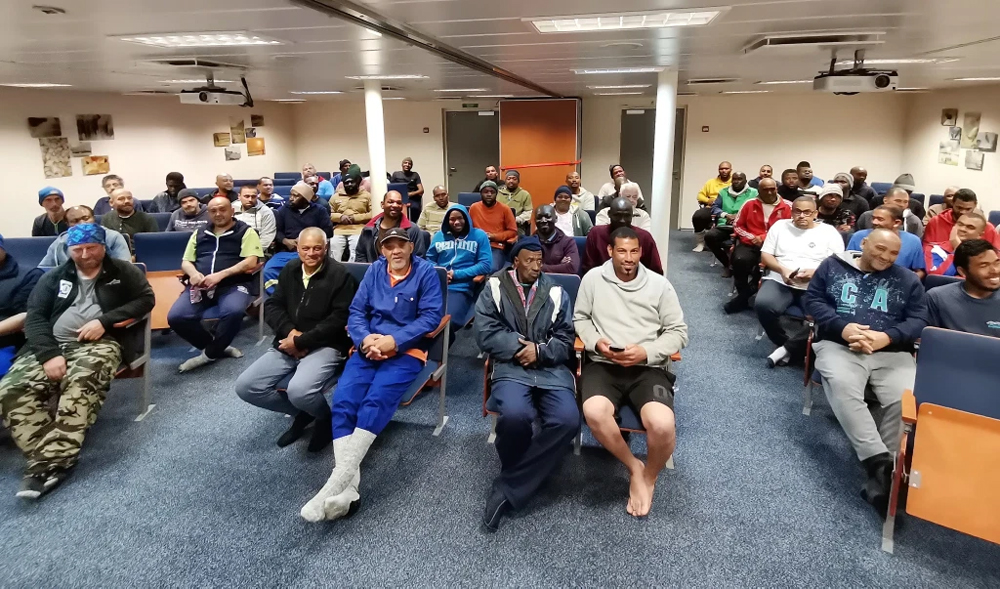 The rescue operation was completed on October 22 and the SA Agulhas II proceeded to Tristan da Cunha, where two residents who had been aboard the Geo Searcher as fishing observers were able to return home. Also, the inhabitants of the island organized donations of clothing and necessities that were airlifted by the helicopters to the rescue ship.

The SA Agulhas II is now returning to South Africa with the 60 crew members from the Geo Searcher. SAMSA is reporting that, again depending on weather conditions, the return voyage to Cape Town is expected to take four to five days.

The Governor of St Helena, Ascension and Tristan da Cunha, along with the Administrator and Chief Islander in Tristan da Cunha each expressed their thanks and appreciation for the dedicated efforts to recover the seafarers and the good news that everyone was safe after their ordeal.