On Sunday, the heavy lift ship Blue Marlin was hijacked off the coast of Equatorial Guinea. The Spanish Navy and forces from Equatorial Guinea boarded the vessel and secured it early on Monday morning.

After unloading her cargo in the waters of Equatorial Guinea, the Blue Marlin departed Sunday, bound for Malta. On Sunday afternoon, the ship was approached by a zodiac and forcibly boarded by seven armed pirates. All twenty of the Marlin's crew members were able to secure themselves in the ship's citadel, which is equipped with communications gear and emergency rations.

At daylight Monday, a team of seven Spanish marines boarded the Marlin and secured the vessel, according to Spain's defense ministry. A larger team of Spanish and Equatorial Guinea forces followed shortly after. No pirates were found, and the crew were unharmed. However, the attackers had fired off weapons during their boarding, and they badly damaged the Marlin's bridge, rendering her unsuitable for navigation until repairs are completed.

Both naval vessels have since departed, but Equatorial Guinea's navy left five armed guards aboard the Marlin to ensure her security. Boskalis says that it has made arrangements for an oceangoing tug to tow the Blue Marlin to a suitable location. 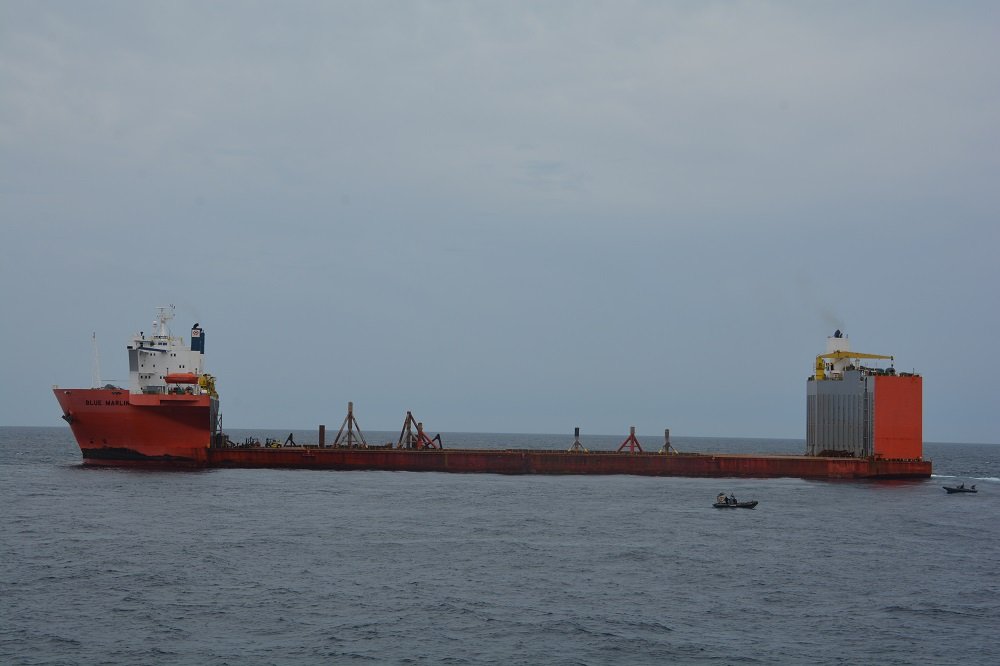 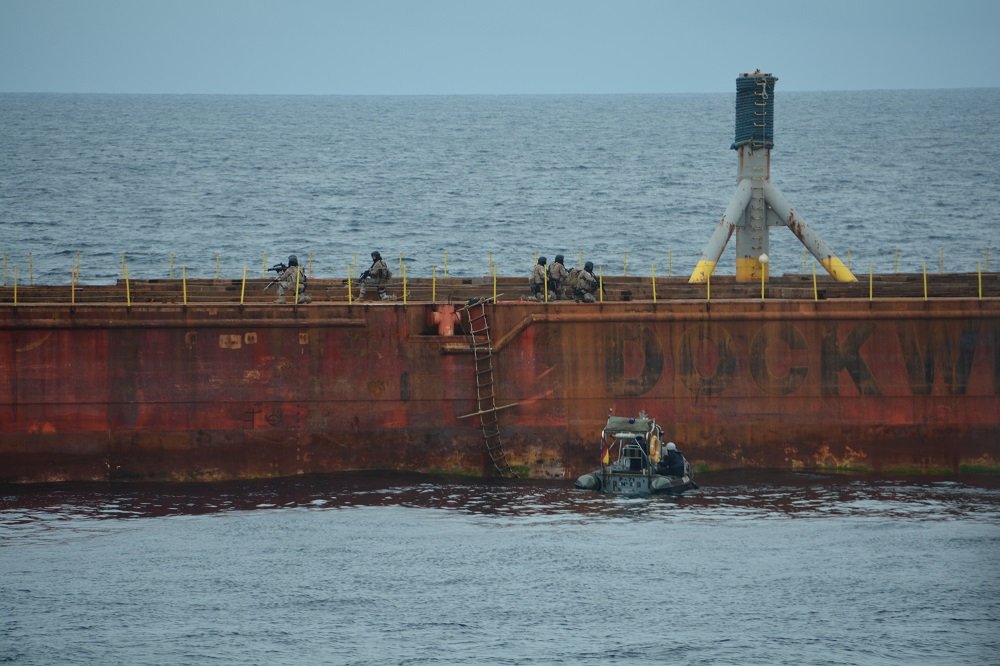 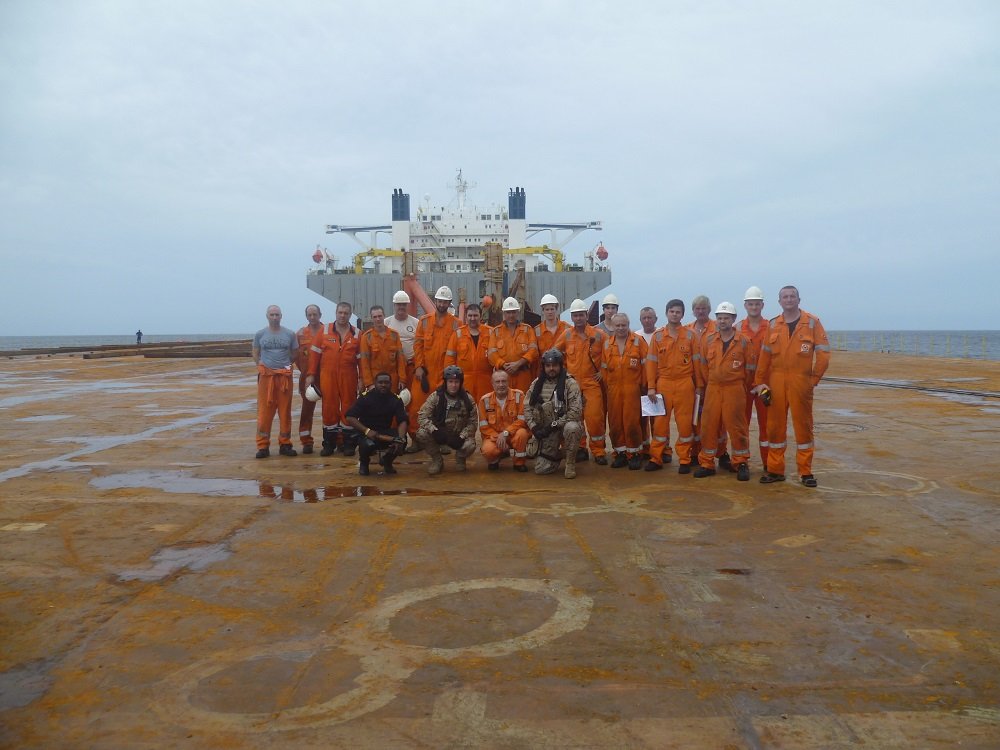 "I want to express my compliments to our crew for their extremely professional and adequate actions in this life threatening situation. I am extremely grateful  and in particular thankful to the navy of Equatorial Guinea for their quick and decisive response, as well as to the Spanish navy for their assistance via MDAT-GoG. Because of their actions, this hijacking could be ended quickly and our colleagues were brought into safety," said Boskalis CEO Peter Berdowski in a statement Monday.

The incident was the second successful anti-piracy intervention that the Serviola has conducted off West Africa this year. In April, the crew of the Serviola detected a hijacking in progress aboard a Nigerian merchant vessel, and the pirate boarding party fled as she approached. The attackers had stolen the crew's money and possessions while they were aboard, but no seafarers were kidnapped.

The Blue Marlin may be best known for her service to the U.S. Navy: she is the ship that brought home the damaged destroyer USS Cole after a terrorist attack in the port of Aden in 2000.

The ICC International Maritime Bureau (IMB) released its quarterly report on maritime piracy showing that there was an overall decline in incidents in the first quarter of 2021. However, they cautioned that while the number of reported piracy attacks against commercial shipping declined in 2021, violence against crew is on the rise with the Gulf of Guinea remaining the world’s piracy hotspot in 2021. "Seafarers are in many respects the unsung heroes of our global economy,” said ICC Secretary General...

After months of struggling to meet the demand for containers, Hapag Lloyd announced it is placing one of the largest orders for boxes in the company’s history. The new order, which is valued at $550 million, is designed to ease the supply shortage that has been brought on by strong demand and slowdowns in the movements of boxes throughout the supply chain due to the pandemic. “The container shipping industry is currently seeing unprecedented demand, which has led to a...

A year after the Tasmanian government stopped plans for two new ferries to be built in Finland, the contract has finally been signed with Finland’s Rauma Marine Constructions. The order, which is an important development for the Finish shipyard, will build new ships to replace the two current ferries which were built in Finland in 1998. Tasmanian shipping company TT-Line Company started working on a plan to build two replacement ferries in 2018. An order was initially placed with Germany’s...

The opportunities in offshore wind continue to attract a broad range of well-known companies to the field, the latest being energy company Chevron. Through its venture capital company, which invests in emerging technologies, Chevron and Moreld Ocean Wind are investing in Ocergy, a developmental company working on new designs for offshore wind turbines and an environmental data monitoring buoy. "We are delighted about this partnership as it will allow Ocergy to advance and commercialize its technologies," said Ocergy CEO Dominique...