The UK’s first CO2 shipping industry could emerge from a decarbonization project currently proceeding in South Wales. The goal of the project is to create the world’s first net zero emissions industrial zone as part of the UK’s government’s ten-point plan for a green industrial revolution.

The South Wales Industrial Cluster deployment project was recently granted more than $25 million in phase two funding following the completion of a phase one assessment under taken in 2020 that looked at decarbonization schemes and the infrastructure required for a hydrogen economy in South Wales.

Phase two of the project involves engineering studies to explore the routes to decarbonization, including the use and production of a hydrogen supply, carbon capture usage and storage and CO2 shipping from South Wales, which would be the first CO2 shipping industry in the whole of the UK, and which the project team says would create an entirely new industry for the region.

“Our ambition is to create a world leading truly sustainable cluster, and this deployment project will form an important step for us to realize that ambition,” says Dr. Chris Williams head of industrial decarbonization, Industry Wales. “Each of our industries faces a transformational change to reach net zero. This project starts to develop the necessary low carbon power, hydrogen and CCUS infrastructure that will be so important to maintain and grow net zero industry in South Wales.”

Among the elements the program is exploring is the production and distribution of hydrogen from both renewable energy and imported LNG that would be distributed by repurposing the existing gas network in the region. The cleaner electricity would be produced using carbon capture and/or hydrogen-rich natural gas with the use of industrial carbon capture and storage technologies along the South Wales coast as well as the transportation and shipping of CO2. 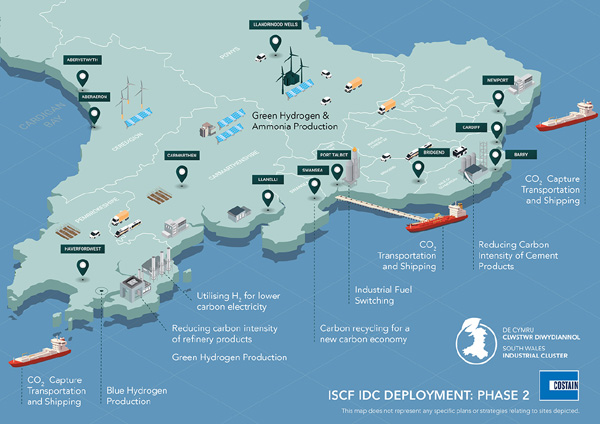 The project led by the British construction and engineering company Costain, is supported by a range of partner organizations from the industrial, academic, law, public and private sectors, including the Associated British Ports, Milford Haven Port Authority, and the Port of Milford Haven, working across the region to create the world’s first net zero emissions industrial zone. As well as contributing to the UK’s carbon reduction commitment, the project’s goal is to enhance the UK’s ability to locally manufacture low or net zero carbon cement and steel products, helping to drive the low carbon future of UK construction and other sectors.

South Wales is the second largest industrial emitter of carbon dioxide in the UK. The project, which received its first grant funding from UK Research and Innovation in the spring of 2020, has a goal of reaching net zero by 2040.