After construction and outfitting is completed, Invincible will undergo intensive testing before being handed over in 2021.

The Singaporean submariner's creed reads: "To our adversaries, we are Invisible. To our enemies, we are Invincible." It is a statement that every submariner recites from the first day of training. In that context the Republic of Singapore Navy decided to christen the new class of submarines the Invincible-class.

The second-in-class will be named Impeccable, carrying the hallmark of excellence, inspiring her crew to always attain the highest standards. The third will be named Illustrious for her to leave stories to inspire generations to come. The fourth and final boat will be Inimitable – peerless, distinctive and second-to-none.

The Type 218SG submarines will have 50 percent greater endurance than Singapore's previous class of submarines and greater weapons-carrying capability.

Singapore sits astride two of the busiest sea lines of communication in the world – the South China Sea and the Strait of Malacca – through which about one-third of the world's maritime trade is transported. The maritime industry is a significant feature of Singapore's economy and contributes around seven percent of its gross domestic product.

The maritime environment around Singapore faces security challenges such as terrorism, shipping of illegal arms, weapons of mass destruction and piracy, said Singapore Minister for Defence, Dr. Ng Eng Hen, at the launch. “The seaborne terrorist attacks such as the 2008 Mumbai attack, where 10 terrorists who arrived via boats killed more than 160 people, demonstrate the real possibility and grave consequences of terrorists infiltrating a country from the sea.

“In Asia, defense spending has increased significantly, reaching $447 billion in 2017. It has exceeded that of Europe combined. This is an increase of approximately 61 percent from its spending in less than a decade ago. Many countries are modernizing their armed forces. Thailand, for instance, approved a plan to acquire the first of three submarines in 2017. China announced plans to expand its submarine fleet by the end of the decade. Indonesia, India and South Korea have plans to expand and modernize their submarine fleets. And in this context, the acquisition of the new Type 218SG submarines is timely,” said Ng. 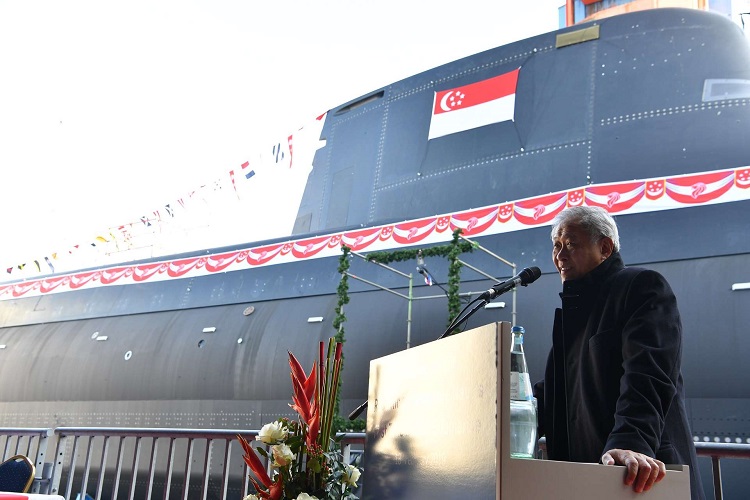 Also on Monday, Singapore's Defence Science and Technology Agency (DSTA) and thyssenkrupp Marine Systems signed a Memorandum of Understanding in Kiel to collaborate on new technologies such as additive manufacturing and data analytics for naval applications. Under the agreement, DSTA and thyssenkrupp Marine Systems will explore the use of additive manufacturing to produce submarine spare parts.