The Norwegian Maritime Authority has fined a Singapore company NOK seven million ($767,000) for violations of the Pollution and Criminal Code after it attempted to sail the ship Harrier for scrapping.

In 2017, the Harrier, formerly known as the Tide Carrier, was to sail from Kvinnherad, Norway, for scrapping on a beach in Gadani, Pakistan. The vessel almost ran aground in February 2017 due to a propulsion failure, and inspectors from the Norwegian Maritime Directorate banned the ship from sailing due to her condition. Invalid nationality certificates from the Comoros and non-real class certificates from the Union Marine Class Society were subsequently presented.

The Norwegian Maritime Authority states: “The company, Wirana Shipping Corporation Pte. Ltd., was the so-called commercial manager of the voyage and decided where the ship should go, what purpose the voyage should have and how it should be carried out. Wirana Shipping CPL is a company that, among other things, buys end-of-life ships and sells them to scrap sites on the beaches of India and Pakistan. The ship's owner was a company registered in the island state of Saint Kitts and Nevis, and Wirana Shipping CPL used a management company to carry out the voyage.” 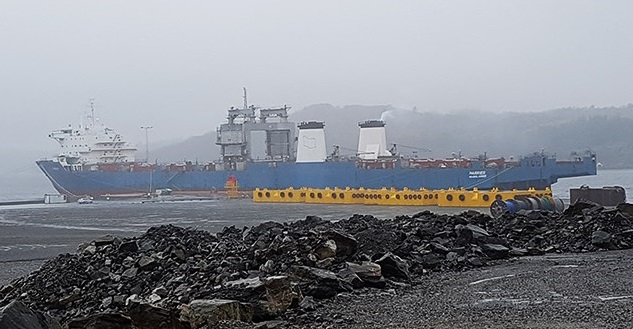 When Harrier was banned from leaving Norway, the CFO of Wirana Shipping CPL at that time is reported to have obtained a fictitious agreement that the ship would be operational off Africa. The Pollution Act was also violated based on the pollution danger the voyage entailed and partly because necessary maintenance of the engine was made during anchorage at Feistein off Klepp without a tugboat in readiness.

Prior to the voyage, the ship had been in storage for 10 years. According to the Norwegian Coastal Administration, there was an imminent danger of acute pollution when the ship came into operation.

The fine has already been paid since Wirana Shipping CPL had provided financial security for the ship as decided by the Oslo District Court when the ship was to sail from Norway in July 2018. The vessel was dismantled at a Turkish yard in 2018.