A partnership of companies is planning a fist of its kind feasibility study to test the use of hydrogen fuel cells on an operational supply ship in Singapore. The collaboration will involve Shell working with Sembcorp Marine and Penguin International on the development of the system that they believe will help to accelerate the development and adoption of hydrogen as a marine fuel.

Under the agreement, Sembcorp Marine will design, fabricate and integrate a hydrogen cell system. The power system will be retrofitted onto a RoRo that is owned by Penguin International and chartered to Shell operating a supply route to a Shell facility in Singapore. Shell will also be responsible for supplying the hydrogen to be used in the test.

"Hydrogen is generally regarded as a new frontier in alternative fuels for shipping," said James Tham, Managing Director of Penguin International. “This trial is significant for Singapore and the maritime community at large. The outcome of this trial, which is based on retrofitting a RoRo which we operate for Shell, could quickly bring many shipowners to the forefront of this alternative fuel.”

The team will first carry out a feasibility study with the intention to install the fuel cell next year. The vessel will then operate for a trial period of 12 months during which Shell notes customers and partners will be welcomed to participate.

The trial will develop and install an auxiliary power unit Proton Exchange Membrane (PEM) fuel cell on an existing RoRo vessel that transports goods, vehicles, and equipment on trucks between the mainland and Shell’s Pulau Bukom manufacturing site. According to reports from Singapore, the vessel will be the 720 gross ton Penguin Tenacity, a newly built 184-foot-long RoRo. 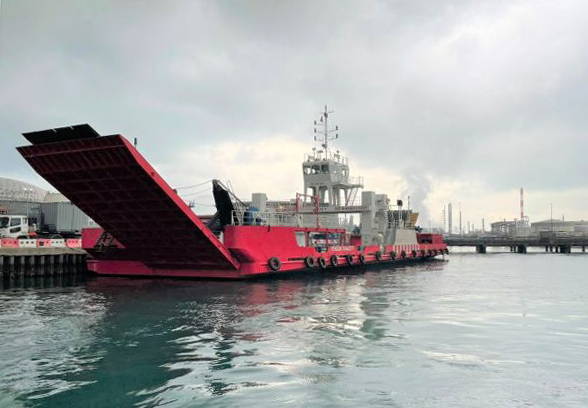 The trail will be conducted on the Penguin Tenacity (Shell)

“This trial is an important step in demonstrating the applicability of hydrogen and fuel cells on ships,” said Nick Potter, General Manager of Shell Shipping and Maritime, Asia Pacific & Middle East. “We see fuel cells and hydrogen as a promising pathway for decarbonizing shipping and working with partners in this way will develop our understanding of this critical technology. This trial is a testament to the thriving sector ecosystem in Singapore that makes this possible. It is also part of our ambition to help accelerate progress towards net-zero emissions in the shipping sector, an important pillar of the Singapore economy.”

This trial is another part of Shell Singapore’s 10-year plan announced in November 2020 that aims to cut its CO2 emissions in the country by about a third within a decade. Shell has set out its target to be a net-zero emissions energy business by 2050, in step with society and with customers.

Shell has also announced it will be joining a consortium to develop an LNG fuel cell trial on a commercial deep-sea vessel, with partners from across the value chain, to demonstrate the maritime suitability of fuel cells and develop the technology for use with future fuels.

The Maritime and Port Authority of Singapore also welcomed this initiative on the use of hydrogen fuel cells expressing its appreciation for the confidence the companies have placed in Singapore for the trail for this new technology in the Port of Singapore. The project was announced as part of a series of initiatives in decarbonization planned for Singapore.