China’s first ship-to-ship LNG bunkering was completed today at the port of Shanghai. The fueling operation was under a long-term agreement with France’s CMA CGM Group and part of China’s efforts to enhance the competitive position of the world’s largest container port to meet the needs of the new generation of large container ships.

CMA CGM Group’s new vessel the 154,700 dwt CMA CGM Symi was recently completed by Hyundai Samho Heavy Industries as part of a class of 22 LNG-fueled containerships being built for Eastern Pacific and operated by the French group.  The containership which measures 1,200 feet in length and has a capacity of 15,000 TEU arrived at the Yangshan Deepwater Port which is part of the massive Shanghai port complex. The fueling operation lasted about 10 hours and loaded approximately 7,000 cubic meters of LNG, while the container loading operations were also underway. The vessel departed Shanghai today, March 15.

With the completion of this joint project, our group is the first shipping line to bunker LNG in China and the first to offer full LNG-fueled container service between China and the U.S. West Coast,” noted Rodolphe Saadé, Chairman and CEO of the CMA CGM Group. “By expanding the network of world-class ports offering LNG services, this bunkering marks an important step in the energy transition.” 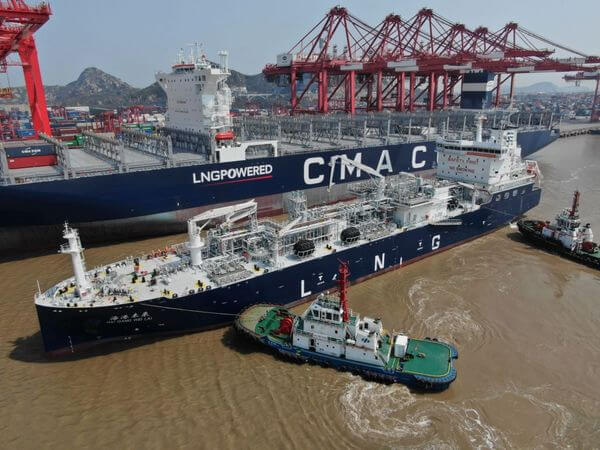 In January 2022, Avenir LNG announced that it had agreed to sell its first 20,000 cbm LNG bunker vessel the Avenir Allegiance to Shanghai SIPG Energy Service Co., a Chinese joint venture between Shanghai International Port Group and Shenergy Group, which is responsible for delivering LNG bunker to CMA CGM’s container ships. The vessel, which is one of the largest LNG bunker vessels currently in service was renamed Haigang Weilai and will now operate full-time from Shanghai.

China also established a series of rules guiding the operation of the LNG bunker vessel to govern its safe conduct at the busy port. A safety zone of approximately 500 feet is maintained on each side of the bunker vessel and vessels are ordered to remain at least one nautical mile ahead of the bunker ship and half a nautical mile behind the vessel when it is underway.

According to Shanghai port officials, establishing the new bunker service was part of their efforts to improve port services and enhance the overall competitiveness of the port. They noted that they have been implementing other green initiatives including a transition from heavy fuel to diesel and providing cold ironing capabilities.  They noted that the introduction of LNG bunkering for international vessels places the port on par with Singapore and Rotterdam as large international container ports with LNG fueling capabilities.

CMA CGM entered into a 10-year agreement with the port of Shanghai to provide LNG fueling for the line’s vessels. The new CMA CGM Symi is sailing between China and the United States and is part of the carrier’s plans to introduce 44 LNG and e-methanol ready vessels by the end of 2024. They currently have 24 of these new vessels in service.