Seven Dead as Ferry Catches Fire in the Philippines

A ferry carrying 134 people caught fire Monday morning in the Philippines, prompting a large search and rescue operation. In the last report, the Philippine Coast Guard is reporting that seven people died with 120 rescued, including 26 injured, and four remain missing with the SAR operation ongoing.

The MV Mercraft 2, a modern fast ferry had departed from Polillo Island in the northeast Philippines in the early morning hours for the crossing of the Polillo Strait and Lamon Bay bound for Real, in the Quezon province. Official reports are saying that there were 126 passengers and eight crew members on board. The vessel had a maximum capacity of 186 people.

The vessel was arriving in the Port of Real when the fire broke out and quickly spread to the length of the ferry. Images of the fire show the vessel fully engulfed for the full length of the ferry. Passengers were forced to jump into the water and multiple images show passengers being rescued from the harbor in their lifejackets. 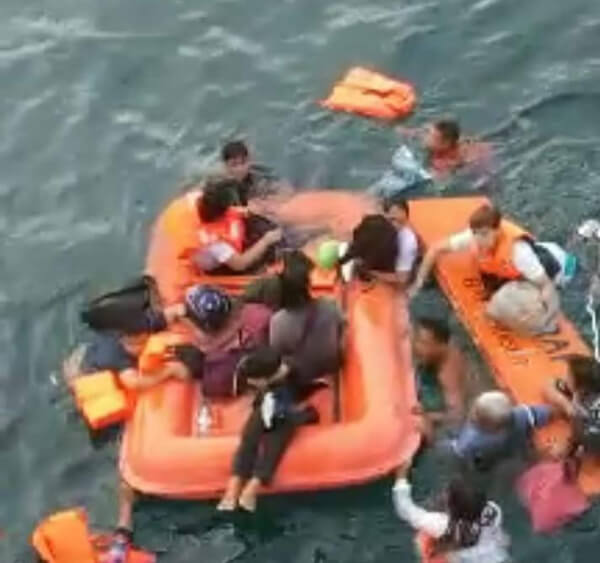 “The fast craft vessel departed from Polillo Island at around 5:00 a.m. bound for Real, Quezon, based on the initial investigation,” the Coast Guard said in their statement. “While underway, a fire allegedly started in the engine room,” they reported while saying an investigation had already commenced to confirm the cause of the fire.

The PCG deployed search and rescue teams after receiving a distress call commencing the operation to rescue the passengers. They were assisted by two RoRo vessels and four other private crafts that were in the vicinity. Six of the individuals rescued were rushed to local hospitals.

By 9:30 am the Coast Guard reports the fire was under control and another vessel in the area, MV Triple Kent, towed the remains of the ferry into Real. Pictures show the vessel destroyed to the waterline.

The MV Mercraft 2 fire is the latest in a series of disasters that has hit the Philippines, an archipelago of more than 7,100 islands that has a poor record for maritime safety. The worst disaster occurred in December 1987 when more than 4,300 people died in what remains the world’s worst peacetime maritime disaster after the ferry Dona Paz sank after colliding with a fuel tanker.

Ferries are the backbone of transportation in the Philippines, with modern and large ferries interconnecting the major ports and Islands while smaller boats serve secondary routes. Since 2002, the country has witnessed 18 maritime disasters that caused the deaths of 944 people. These include the 2013 disaster in which at least 114 passengers drowned when the Thomas Aquinas sank off the central island of Cebu. In most of the disasters, the PCG and other government agencies have been unable to complete conclusive investigations on the causes of the accidents.