Full Speed into the Hurricane's Path

The U.S. Coast Guard suspended its search for the missing crew of the Tote-operated M/V El Faro cargo ship, which sank off the Bahamas on October 1. The search and resuce operation by the USCG has lasted over the last eight days. A U.S. Navy salvage unit will now join the search for the ship’s wreckage.

Tote Maritime believes the ship sank after suffering engine failure during its weekly run from Jacksonville to San Juan, Puerto Rico, leaving the ship floundering in Hurricane Joaquin off the southern Bahamas.

Tote officials said Captain Michael Davison had a sound plan to avoid Hurricane Joaquin. The captain had real-time weather information on its departure from Jacksonville.

The ill-fated U.S.-flagged El Faro  was sailing at near full speed into the center of the storm before it lost propulsion amid mountainous waves and brutal winds, according to ship tracking data. 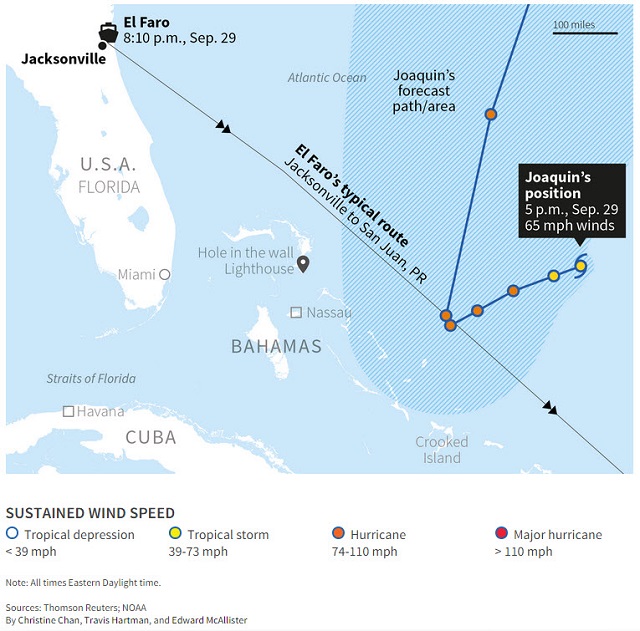 The data on Thomson Reuters Eikon raises questions about the shipowner's assertion that the vessel's captain had chosen a "sound plan" to pass around Joaquin "with a margin of comfort" but was then thwarted by engineering problems. It shows that even before the ship lost power it was in stormy waters that many mariners interviewed said they would never have entered.

After reviewing the data, Klaus Luhta, a former ship's officer and chief of staff at the International Organization of Masters, Mates, and Pilots, went silent for a moment as he contemplated what has been called the worst cargo shipping disaster involving a U.S.-flagged vessel in more than 30 years.

"I don't know what he was thinking - I can't even speculate," said Luhta in a telephone interview. "He headed right into the track."

While the decision-making may appear inexplicable from a distance, Captain Michael Davidson was an experienced mariner, and it is not clear what factors he would have been weighing as he sought to save his ship from calamity. El Faro stopped communicating after reporting early on October 1 that it had lost propulsion, was taking on water and listing. No reason was given for the loss of power.

A spokesman for ship owner Tote Inc, Michael Hanson, declined comment, saying the National Transportation Safety Board, which is investigating the sinking, had asked the company to refer all questions related to the investigation to them.

The ship tracking data, which may provide the most complete track yet of the El Faro in the 24 hours before disaster struck, also shows that contrary to some reports the ship did not follow its normal course.

At 6.16 a.m. Eastern Time on September 30, 10 hours after heading out of Jacksonville, Florida, the ship began deviating from its usual straight-line route to San Juan, Puerto Rico, hugging nearer to the Bahamas but still on course to meet the storm's path, according to the data, which uses a ship's satellite transmissions to track its location and speed.

By that night, squeezed against the chain of islands to the west, El Faro was trapped as the storm track shifted further southwest, putting the hurricane on a collision course with the 790-foot (241m) cargo ship with 28 U.S. citizens and five Polish nationals aboard. At that point the ship was still sailing at near full speed.

Ship captains who reviewed the data said that on the morning of September 30, still north of the Bahamas and hundreds of miles from the storm, Davidson still had three good options: slow down to assess the weather; turn around; or change course, heading west and hugging the Florida coast.

He would have had access to weather forecasts every few hours from the National Hurricane Center (NHC) giving the likely speed, strength and direction of the storm.

The El Faro took the Florida coast route on August 25, when tropical storm Erika was heading toward the Caribbean. The decision not to use that route on September 30 is unclear. The captain could have been worried about skirting the Florida coast and then threading between Cuba and the Bahamas in nasty weather, maritime experts said.

As El Faro plowed on, its options dwindled.

At about 5 p.m. ET on September 30 - nine hours after Joaquin was first declared a hurricane - the ship sailed on past "Hole in the Wall," a gap in the Bahamas archipelago used by seafarers for centuries to slip westwards through the islands toward Cuba. Escaping via that route would have lengthened the ship's voyage and consumed more fuel, possible factors in the captain's decision not to take it.

At that point, with the NHC forecasting the hurricane would sweep close to the Bahamas, before heading back north, Davidson ran out of feasible options, maritime experts said. The ship was committed to a southern route, straight into the storm.

"You should always have an emergency escape route," said Captain Scott Futcher, a master mariner with 20 years of experience at sea. "He should have gone further south. We are taught that you have to have an out, even if you have to make a huge loop around."

The tracking data shows that the ship did in fact go further south, deviating nearly 100 miles off its usual course, but it was not enough to escape Joaquin.

At 9.09 p.m. ET on September 30, about 200 miles northwest of the storm, the ship was sailing at 20 knots (23 mph), very close to its full speed. El Faro was heading straight into the NHC'S projected track of the hurricane, which was then packing 105mph winds and whipping up 50-foot waves.

At 2:09 a.m. ET, October 1, El Faro was only 50 miles from the eye of Joaquin. At that point the ship was still moving at nearly 17 knots, according to the ship tracking data.

Facing fierce winds and high seas, the ship had made little progress by 3:56 a.m. ET. In its last logged location, the ship was less than 50 miles from the eye and had slowed down to 10.7 knots.

The company has said there are a number of different navigational trade routes used for the voyage to Puerto Rico that vary according to conditions. The course was charted by Davidson without head office involvement, it said.

In contrast to El Faro, at least one other ship in the area of Joaquin gave it a wide berth.

The Azure Bay, a tanker owned by Singapore-based Pioneer Marine, was heading north past Cuba toward the Bahamas in the early hours of September 30, when its captain warned that its intended course could bring it within 150 nautical miles of Joaquin. The captain, liaising with Pioneer, decided to circle back south of Cuba, to "ride out the storm" according to Charan Singh, a senior vice president at Pioneer.

What happened in the early hours of October 1 after contact was lost with the El Faro is not known. NTSB investigators will now likely sift through the debris and try to locate the ship's black box, or voyage data recorder, to try to put together at least some pieces of the puzzle.

Meanwhile, some in the industry are calling to mind an earlier large American ship loss - the Marine Electric.

Marine Electric, a 605-foot bulk carrier, sank in February 1983 about 30 miles off the coast of Virginia in 130 feet of water. Thirty-one of the 34 crewmembers were killed. The three survivors endured 90 minutes drifting in the frigid waters of the Atlantic.

The ship sailed through a fierce storm, and as it neared the mouth of the Chesapeake Bay it battled 25-foot (7.6m) waves and winds gusting to more than 55 miles per hour (89km/h).

The following day, the vessel was contacted by the USCG to turn back to assist a fishing vessel, the Theodora, that was taking on water. The Theodora eventually recovered and proceeded on its westerly course back to Virginia. The Marine Electric turned north to resume its original route.

During the course of the investigation into the ship’s sinking, it was theorized that the ship ran aground during its maneuvering to help the Theodora and fatally damaging the hull, causing it to sink five hours later.

But USCG investigations, and independent examinations of the wreck, determined that the Marine Electric left port in an un-seaworthy condition, with gaping holes in its deck plating and hatch covers. It was subsequently discovered that much of the paperwork supporting the vessel’s status as seaworthy was faked.

The USCG has acknowledged that the chance of finding El Faro survivors have become very remote. A body of a crew member has already been spotted. There were 28 U.S. seamen and five Polish contractors onboard when the ship sail from Jacksonville.