Sea Shepherd Conservation Society is returning to Mexico’s Gulf of California as part of an ongoing campaign to protect the endangered vaquita porpoise.

Sea Shepherd’s M/V Farley Mowat is back for the third consecutive year along with the M/V John Paul DeJoria, arriving from the Caribbean after a relief mission to islands affected by Hurricane Maria and Irma.

The organization will work with the Mexican government and will patrol for poachers and remove nets until May 2018. 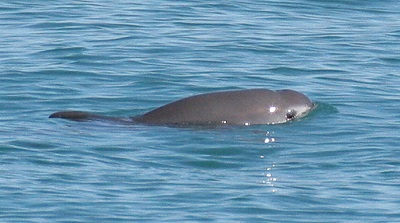 The vaquita’s signature dark circles around its eyes and lips have earned it the nickname Panda of the Sea. At around five foot in length, it is the smallest marine mammal in the world and the most endangered. The most recent statistics show the population has dwindled to less than 30 individuals.

The vaquita is particularly susceptible to population decline, with a slower rate of reproduction than that of other porpoise species – giving birth to only one calf every two years. The species also has a comparatively short lifespan of approximately 20 years.

The biggest threat to the vaquita’s survival are illegal gillnets fishermen put out to catch another endangered species: the totoaba bass. Similar in size to the totoaba, the vaquita gets caught in these gillnets, suffocates and drowns. Meanwhile the captured totoaba has its swim bladder removed and transported to China and Hong Kong where it sells for tens of thousands of dollars on the black market for its unsubstantiated medicinal properties.

Sea Shepherd Founder and CEO Captain Paul Watson says: “If not for the confiscation of hundreds of nets and our drone interventions in finding the poachers at night, the vaquita would now be extinct. There are some people who say this is a lost cause and that extinction is inevitable. We disagree.”

On April 18, 2015, Sea Shepherd crewmembers documented the first recorded sighting of a vaquita since 2013, shattering claims by some locals that the species is already extinct. The resulting video made national headlines in Mexico, prompting the government to reach out to Sea Shepherd. The following month, a partnership between Sea Shepherd and the Mexican government was announced, and since then, the two organizations have worked together to protect the vaquita.