Recognizing that methane slip continues to be widely discussed and used by critics of LNG-fueled ships, the industry trade association SEA-LNG is again firing back citing studies and data that show the improvements along with the future path to biofuels. While not disputing the assertions that methane release is damaging to the environment, the group takes aim at the misinformation that they say endangers the shipping industry’s path to decarbonization.

The World Bank lent its name and reputation to the debate in 2021 with a report citing methane slip and encouraging the industry and developing nations to skip past LNG to future hydrogen-based fuels. SEA-LNG criticized the report saying that it was based on outdated information but environmental activists have continued to cite the information. Last week, the NGO Transport & Environment said it had used a specially equipped infrared camera to document methane slip from in-service vessels at the Port of Rotterdam.

“SEA-LNG is disappointed to see the ongoing campaign of misinformation that misrepresents the progress the industry has made, and is continuing to make, to reduce slip. Sensationalist claims lacking scientific evidence are a transparent attempt to distract the industry from investing in LNG,” the group writes in a statement released on April 21. 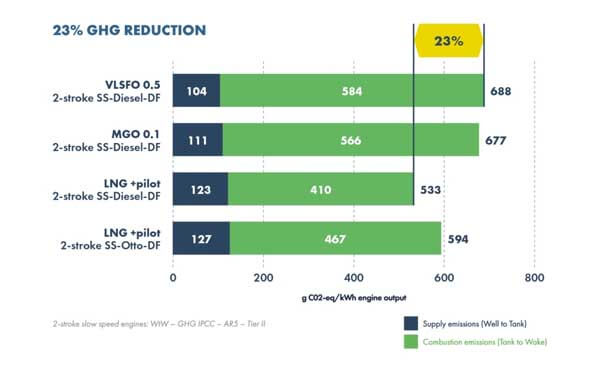 The industry group cites an analysis published in 2021 by Sphera using primary data from all major engine manufacturers and reviewed by independent academic experts. SEA-LNG highlights the report’s finding that LNG-fueled engines have GHG benefits compared with current oil-based engines of between 20 to 30 percent for 2-stroke slow-speed engines, and 11 to 21 percent for 4-stroke medium speed engines, inclusive of methane slip.

“With the ongoing steady technological advancements, the GHG benefits will only improve in the future versions of LNG-fueled engines as the technologies are more widely adopted by the shipping sector,” says SEA-LNG.

They repeated their earlier assertions that engine manufacturers are making strong progress in reducing methane slip. They say that engine manufacturers have an economic incentive to improve the efficiency and performance of their products, especially with the strong orderbook for new LNG-fueled vessels emerging. They state that at least half of the LNG vessels on order today will use engines that have minimized levels of slip.

SEA-LNG says that levels of slip have fallen four-fold since the early 2000s. Further, with engine manufacturers continuing to identify technological pathways the group says all LNG-fueled engines will have minimal levels of methane slip by 2030, if not sooner.

Further supporting the efforts to reduce the levels of methane reaching the atmosphere, they also point to enhanced onboard monitoring. In addition, there is research on-going to develop catalyst systems to capture methane from the exhaust gas. A Japanese research effort, for example, reported that they had been successful with tests of the world's first methane oxidation catalyst system and received design approval in March 2022.

The longer-term objective for SEA-LNG and the industry is to continue the migration to bioLNG as a route to net-zero greenhouse gas emissions and ultimately renewable synthetic LNG. They point to the availability of bioLNG that is being bunkered in Europe and North America. The group says it is confident that bioLNG and renewable synthetic LNG will be an integral part of a basket of net-zero emission marine fuels in the future.

Many shipowners agree with SEA-LNG as they are rapidly building the orderbook for new dual-fueled vessels that will use LNG. DNV reported as of the beginning of the year that there were 251 LNG-fueled vessels in operation up from 189 a year earlier and that new orders placed in 2021 would double the LNG fleet worldwide. DNV forecasts by 2028 that there will be at least 864 LNG-fueled and LNG-ready vessels in the global fleet.