Schedule reliability among the global container lines remains at the bottom of the range with only one-third of vessels operating on schedule. The new data from research and advisory services company Sea-Intelligence shows only slight improvements in reliability and a small reduction in wait times confirming the widely held belief that progress will be slow in the recovery for the container shipping companies.

Sea-Intelligence reviewed schedule reliability across 34 different trade lanes and 60-plus carriers reporting that only 34.4 percent of containerships were on schedule during October 2021. This remains at the bottom of the range, which Sea-Intelligence reports has been between 34 and 40 percent for all of 2021, but plunged from better than 70 percent till the summer of 2020. On a year-on-year basis, schedule reliability in October 2021 was down 18 percentage points versus 2020.

“The only ‘positive’, if one should call it that, is that schedule reliability is not plummeting further,” said Alan Murphy, CEO of Sea-Intelligence. He highlights a slight improvement of just four-tenths of a percentage point in October versus September. 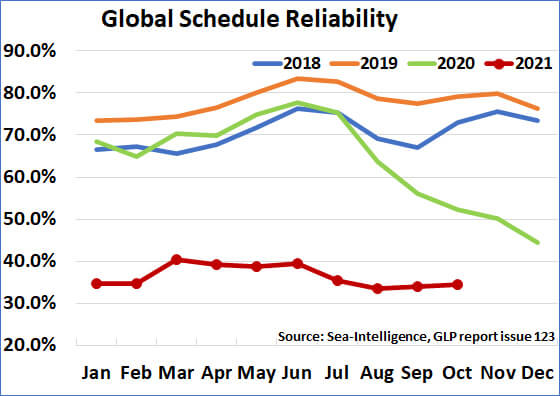 The data shows that the global container industry averaged 70 percent reliability in 2018 and nearly 80 percent in 2019. The decline began in August 2020 reaching the 34 percent level in January 2021. The industry was unable to maintain a slight improvement that was achieved during the spring sliding back to the current levels.

The average delay for late vessel arrivals, which was historically around four days, peaked at just under eight days in August 2021. It currently stands at 7.34 days, which is slightly improved over the past two months but is still far beyond historical norms.

Focusing on the 14 largest container shipping lines, the average performance is even lower showing that just a quarter of vessels are operating on schedule in October 2021. That is down by half from a year ago. According to Sea-Intelligence, Maersk followed by Hamburg Sud had the highest reliability while four carriers were under 20 percent. Ten carriers recorded a monthly improvement in schedule reliability, while no carrier recorded a year-over-year improvement in schedule reliability. All but three carriers recording double-digit year-over-year declines of over 20 percentage points.

While ports and shippers are reporting some progress on reducing the congestion in the supply chain, the expectation is that it will be at least 2022 before the liner companies will experience significant improvements in their operations.