Four new records were established today for the volume of ship traffic in the Southern California port complex at San Pedro Bay led by the continuing surge in imports. While the number of containerships arriving at the ports of Los Angeles and Long Beach might decline slightly in the coming days, the overall outlook is for a steady flow of ships and a continued record-setting inbound flow of containers.

The number of vessels waiting outside the port continues to grow. The Marine Exchange reports that a total of 74 of the vessels “in port” are actually waiting offshore. This includes a record of 55 container vessels passing the prior record of 49 set just yesterday. The ports’ anchorages are full as are the contingency anchorages and now a fourth record was set with 16 vessels in the drift areas as of mid-day surpassing the prior record of a dozen. The Marine Exchange started using the drift areas in January 2021 for the first time in 17 years and after clearing them by spring has again been forced to hold vessels outside when the anchorages are full. 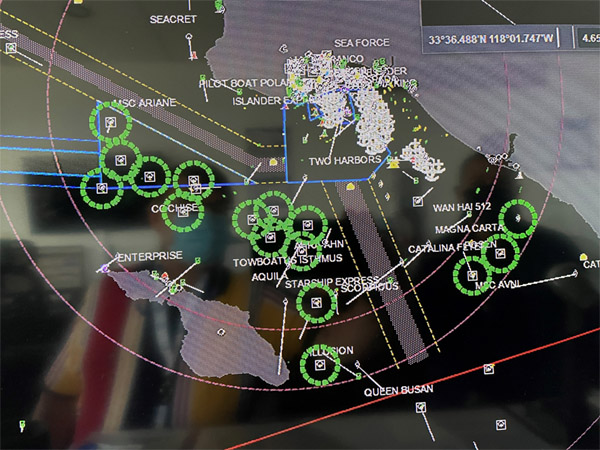 The 55 containerships currently waiting outside the port include 14 mega-containerships each with a capacity of over 10,000 TEU. Those vessels alone have a combined capacity of 181,000 TEU. The report indicates that the containerships have been in the anchorage anywhere between one and 18 days. Twenty-four of the boxships waiting are heading to terminals in the Port of Los Angeles, which reports that its average waiting time has risen to 8.5 days based on a 30-day average.

“A huge 56 vessels are scheduled to arrive over the next three days,” reports Louttit. He calculates that it is 19 more than their normal pre-COVID levels. The pending arrivals include another 22 containerships.

“As we look forward to the weekend in these record-breaking times, as the Coast Guard's motto ‘Semper Paratus’ (Always Ready) says, we and our port partners keep your Marine Transportation system always ready and safe, secure, reliable, and environmentally sound,” concludes Louttit.

The peak shipping season started with a roar reported the Port of Long Beach lifting its operations to its strongest August on record. Dockworkers and terminal operators moved 807,704 TEU the port announced which represented a better than 11 percent increase compared to August 2020, but the strongest gains came with empties followed by imports. Exports were down more than five percent in August.

The ports continue to project a steady increase in container traffic in the coming weeks. The Port of Los Angeles in its Signal planning tool reports volumes were up 24 percent this week alone to over 122,000 TEU. However, that pales in comparison to the forecast of over 170,00 TEU in just two weeks.