The salvage operation to remove the sunken fishing vessel Aleutian Isle from waters off San Juan Island have run into a snag. The salvage team placed lifting slings on the boat and successfully hoisted it out of the water with a crane barge, but the operation has had to pause because the crew is having difficulty with dewatering.

The Aleutian Isle was raised above the surface on Saturday afternoon, and salvage crews were able to pump out nearly 800 gallons of oily-water mixture. However, they could not access all of the internal compartments safely, and an excessive amount of water remains on board. The extra water weight is more than the team planned for, and it is heavy enough that it could cause the boat to break up if lifted further in the current configuration - even though the crane is able to take the load.

"Raising the vessel to the surface is certainly a success, but the complexity of this operation continues to challenge our team,” said U.S. Coast Guard Cmdr. Kira Moody, the incident commander. 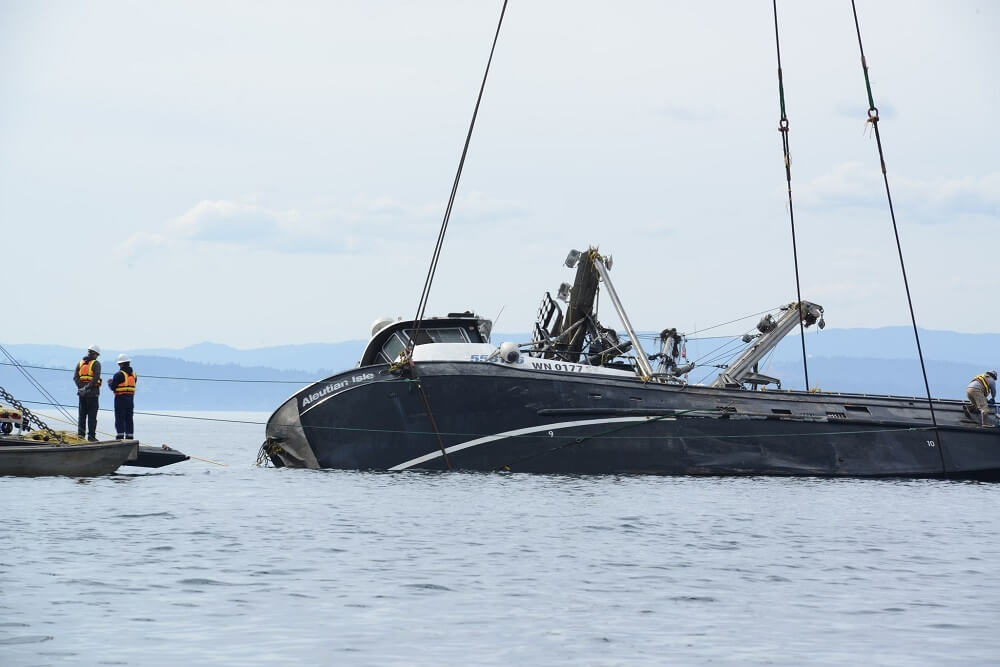 Moody said that the next step will likely be to move the crane barge and its payload to a sheltered location, where it will be easier to conduct the salvage work with less risk to the divers. The operation is expected to resume within the next several days once the team has a chance to evaluate the situation and make new plans.

A sheen of diesel was visible on the surface when the boat came up, as anticipated in the salvage plan. The area was boomed off and the responders cleaned up as much as possible.

Aleutian Isle went down in Haro Strait on August 13. She began taking on water near Sunset Point on the west side of San Juan Island that afternoon, and the crew were rescued safely before the vessel went down. She had about 2,600 gallons of diesel and oil on board at the time of the sinking, and the salvage operation is aimed at minimizing the risk of pollution.