Russia is highlighting that its only floating storage and regasification vessel, the Marshal Vasilevsky, recently completed its first voyage along the North Sea Route as part of the efforts to promote the alternate sea route. The FSRU was being used to transport LNG to India.

The 967-foot vessel, loaded 162,500 cm on LNG in an operation lasting nearly 14 hours from the Yamal LNG facility at the port of Sabetta. On her way to the gas terminal, the FSRU crossed the eastern section of the Arctic operating in a slow-steaming mode with an average speed of 10 knots. While she encountered persistent fog and snow squalls, the vessel, which is Arctic 4 ice class meaning it can travel in ice up to approximately two and a half feet in thickness, was able to proceed without icebreaker support.

The ship’s captain, Sergey Larchenko, said “Our first passage along the Northern Sea Route passed safely under favorable weather conditions,” in a statement Sovcomflot managers of the vessel. “Most of the time we navigated in clear water, in the East Siberian Sea there was small-sized one-year ice of 1-3 points, mainly 40-70 cm thick. There were separate ice floes up to 150 cm thick, which did not hinder navigation."

After completing the loading, the FSRU traveled along the North Sea Route on its voyage to India. It made calls at Singapore and Colombo before reaching the Indian port of Dabhol in about a month. 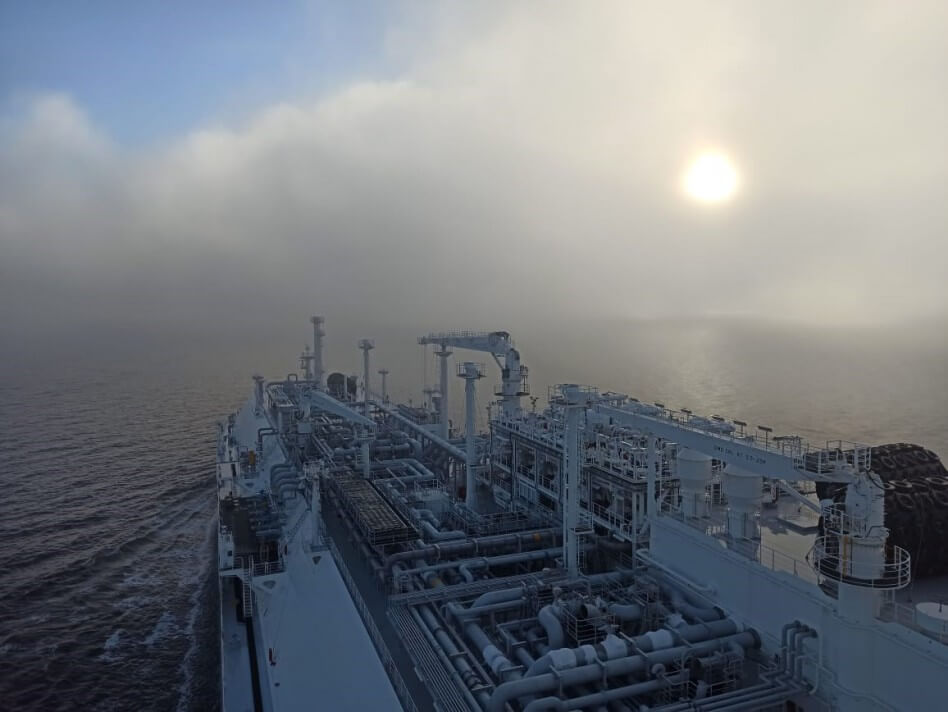 The Marshal Vasilevsky was commissioned at a high-profile event in January 2019 attended by Vladimir Putin. The vessel, which was built by Hyundai in South Korea, was designed to operate in its role as a gas terminal in the Kaliningrad region. With a capacity of 174,000 cm of LNG, it was to improve the reliability of gas supplies in the region and provide an emergency capability in case of a disruption in the supply of LNG. The vessel had been idle for six months before the decision to use it to transport LNG.

This latest voyage comes as Russia is reporting a continued growth of shipments across the North Sea Route. Development of the shipping lane is a high priority for Russia personally backed by President Putin. The Russian Federal Agency for Maritime and River Transport recently reported a 4.5 percent increase in traffic on the route so far in 2021 compared to last year. By current calculations, traffic on the route could exceed 35 million tons in 2021 up from just under 33 million tons last year.

While volume on the route continues to climb, it is still far short of President Putin’s goal of 80 million tons by 2024. ROSATOM, which is responsible for infrastructure operations on the North Sea Route has said that traffic is being built in segments. The long-term goal is to reach 150 million tons by 2030.

Last summer, the Russians announced a new deal with DP World. Together, the companies are exploring developing the infrastructure required for container shipping on the North Sea Route.