Royal Caribbean International celebrated a double “first event” as the cruise line moves forward with the construction of its two new giant cruise ships which will be among the largest in the world. The company reported the “coin ceremony” and laying of the first block for its giant new cruise ship, the first of a new class of LNG-powered ships being built in Finland, while in France steel cutting began for the sixth Oasis class cruise ship which is also rumored to be revolutionary instead of evolutionary for the class.

At the Meyer Turku shipyard in Finland work has been well underway on the next ship which the company named Icon of the Seas. The Icon project is for a new class of cruise ships that will accommodate approximately 5,000 passengers. The company has reported that they will incorporate multiple new technologies and elements for the passengers. The confirmed detail is that they will be Royal Caribbean’s first cruise ships fueled with liquified natural gas. They will also include waste heat recovery systems as well as shore power connections.

The order for the first two ships of the class was placed in 2016 and expanded to include a third sister ship in 2019. The shipyard and cruise line held a steel cutting ceremony in June 2021 for the first ship and today marked the placement of the first blocks into the drydock. Previously as the blocks were being assembled in the building hall Royal Caribbean highlighted the ship’s LNG fuel tank, which is 307 tons and 90 feet long.

The keel laying, a longstanding maritime tradition, involved a 3,000-ton crane lifting a massive steel block that is placed into the new ship's building dock. It was placed on top of two coins, which represent the shipyard and cruise line. The coins are meant to bring luck during construction, and they will be retrieved and placed aboard the vessel before it enters service.

"Five years ago, we began dreaming of Icon of the Seas, and now the next phase of this iconic adventure is beginning," said Michael Bayley, president and CEO of Royal Caribbean International. "As this game-changing ship takes shape, the excitement from families and travelers alike, travel advisors and our partners continues to build. Later this year, we'll reveal the lineup of firsts and favorites that will set a new standard for vacations come fall 2023." 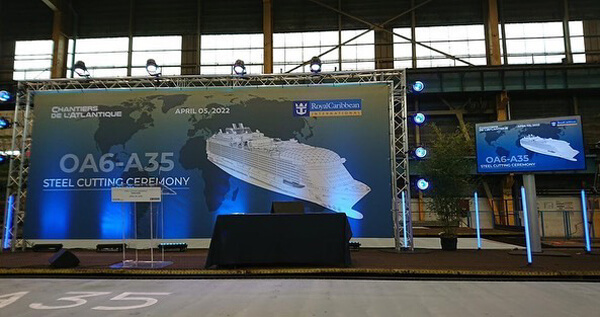 At the same time, at Chantiers de l'Atlantique in France, Royal Caribbean also marked the first steel cut for the next cruise ship in the Oasis class which is expected to be the largest cruise ship in the world. Official details on the new cruise ship remain closely guarded by the company but various elements are being reported on the Internet including the ship’s name as Utopia of the Sea. French media reports are also saying that during the steel cutting it was announced that the company is changing the design of the vessel to also be LNG-fueled.

The new ship will be the same length, 1,187 feet, and approximately the same gross tonnage, 236,857 gt, as the previous member of the class, Wonder of the Seas, which entered service last month as the world’s largest cruise ship. According to the Internet reports, the next ship will have a slightly reduced passenger capacity to accommodate the LNG fuel tanks and power plant.

Delivery of the sixth vessel of the Oasis class is scheduled for late spring 2024. The delivery of Icon of the Seas was rescheduled due to delays during the pandemic to the fall of 2023. Two sister ships were scheduled for delivery in 2024 and 2025.