Water levels on the Rhine River especially in the lower and middle regions traveling through Germany are reaching critically low levels impacting the movement of vital commercial barges, inter-city transport, sightseeing, and cruise ships. Fears have been growing about the situation for most of the summer coming just four years after what experts had called a one in a hundred years record drought. There are little signs of much-needed rain to alleviate the problems.

Water levels west of Frankfurt at one of the lowest points in the river near the town of Kaub touched 30 cm (approximately 12 inches) on Monday, a level at which the authorities explain river traffic potentially reaches a standstill. Shallow-draft barges generally require levels between 30 and 35 cm to operate while the larger, fully loaded vessels need at least 1.5 meters (approximately 60 inches) for safe operations.

The authority explains that its water figures do not directly correspond to the fairway depth. Based on total water levels they estimate that 20 to 30 cm are required for a safety margin for shipping. Their official levels set the Lower Rhine at around 1.85 to 2 meters while the official level of the Middle Rhine is around 1.43 meters in areas such as the bottleneck near Kaub. Unofficial reports are saying the river in places is down to 85 cm from normal levels of 3 meters.

“The Waterways and Shipping Authority Rhine has not imposed any restrictions on shipping,” the WPA noted in its update. They however point out that less cargo can be transported during the current conditions. 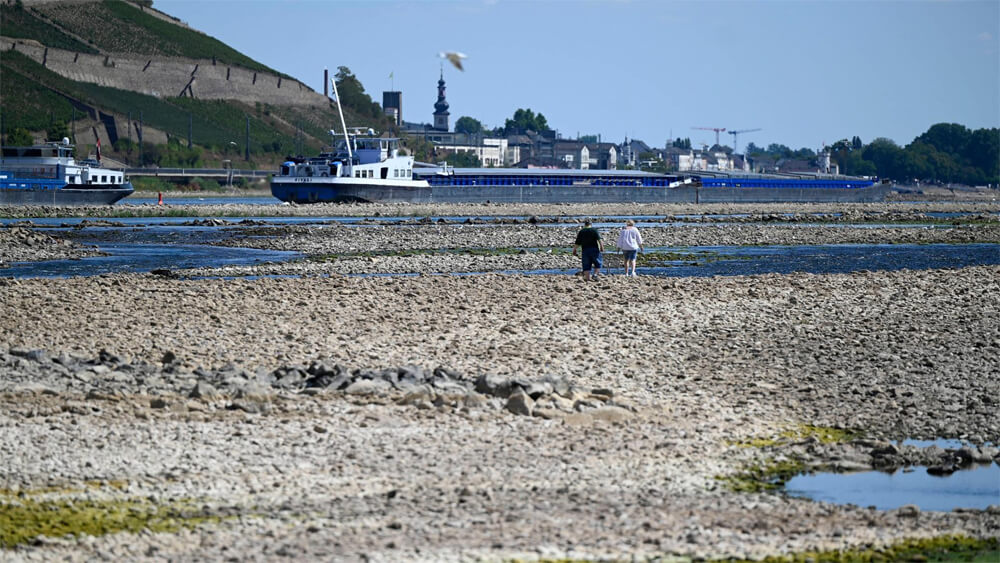 The Rhine is one of the most important riverways in Europe serving as a lifeline to move fuel including oil, coal, grains, chemicals, and minerals, as well as the passenger traffic. Shippers are reporting that they have been forced to cut loads down to about 25 percent of normal capacity to manage the current low water levels.

"Ships are still running, but fewer of them and with lighter loads," the WSA told Reuters. "Traffic has not yet come to a complete standstill."

However, with the current forecasts, people are growing increasingly worried. Water levels at Kaub were down 5 cm from yesterday. Experts are however hopeful that the levels at this point in the river might stabilize just above the minimum level required for transportation.

BASF, the chemical company, told Bloomberg that it was forced to use vessels with a capacity of 200 tons due to the current water levels. The company is rushing to complete and introduce a new vessel that will be able to carry up to 650 tons even in low water levels comparable to what the river is currently experiencing.

At points along the river though barges have begun to suspend operations. Some operators point out it is simply not economical to operate at these low levels. As a result, two coal-fired power plants reported that they have been required to reduce operating levels due to the inability to move fuel on the river. Reports are saving the shipping costs have also risen as much as five times normal due to the limits on the river. Economists have even forecast that the problems on the river are increasing the chances of a recession.

The German government said it is closely monitoring the situation and considering emergency measures if water levels continue to fall. In a document seen by Reuters, they report the government will prioritize the movement of energy on the German railways including gasoline and product to heat homes. The problems on the river are adding further strain and disruption to the supply chain which has been under pressure for more than two years.

For now, the drought conditions have been mostly limited to the sections of the river in Germany and Switzerland. Elsewhere authorities highlight that traffic is moving normally although they too continue to carefully monitor water levels and rainfall as Europe experiences one of its hottest and driest summers on record.