Retrofit Concepts to Reduce Cost of LNG Conversion and Operation

As the shipping industry looks for solutions to meet the goals for decarbonization, one of the challenges is developing a cost-effective solution to address the large number of in-service vessels. Two different groups presented proposed solutions that they say can dramatically lower the cost of retrofitting a broad range of in-service containerships to use LNG and prepare for future alternative fuels such as bio-LNG or possibly next-generation fuels such as ammonia.

While the container shipping segment has begun to develop LNG-ready vessels, the cost and lost time in service remain a hurdle to be overcome. Hapag-Lloyd carried out the first large conversion of an LNG-ready vessel, the 15,000 TEU Sajir, which was built in 2014 anticipating a future conversion. The conversion took nearly nine months while the LNG tank was fitted and the main engine and auxiliary diesel engines were refitted for LNG and low sulfur operations. In addition to the financial cost and time out of service, the vessel sacrificed an area equivalent to 350 containers installing a 6,700 cubic meter gas storage system and the pipework between storage and engine. Rolf Habben Jansen, CEO of Hapag-Lloyd, said that while the company gained valuable experience in the conversion and the ongoing operation of the vessel, the cost of the retrofit was prohibitive for the line to peruse it broadly across its fleet.

Marine Service GmbH and Newport Shipping believe they have developed an approach that will be simpler for the refit, requiring less time and cost while being easier to operate. Their concept consists of LNG cylinders containerized in open frames the same size as existing 40-foot containers. The cylinders would be stacked on deck similar to current container stacks, handled in the same process as cargo containers, and secured with the same process. The LNG containers would be fully portable so that they could be loaded and unloaded with container cranes and swapped out during port calls for full tanks. The empties would be transferred to trucks for the refilling and could be stored at the port ready to load the vessel on its next call.

LNG piping and venting system, as well as firefighting systems, would be integrated into the container cell guides structure. The gas handling room would be arranged adjacent to the container storage and separated from the containers by a cofferdam and fire protection means, allowing to feed low pressure and high-pressure fuel gas systems suited to the current 4-stroke and 2-stroke dual-fuel engines. 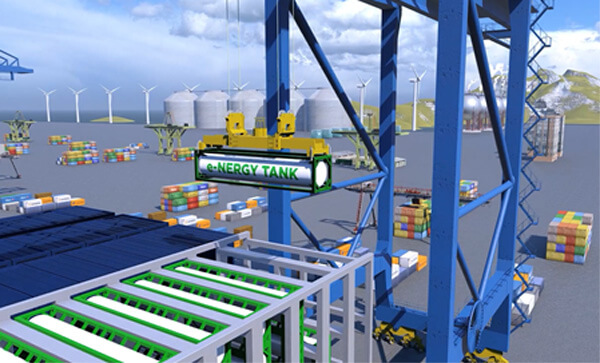 The LNG fuel tank container would be a class-approved Type C LNG fuel tank in accordance with the IGF-code and is based on German TÜV certified IMDG container. The capacity of the tank is 31 gross tons and about 33m3 of LNG. The containers have a fail-safe dry quick coupling connection and are approved for loading in up to seven layers high stacks. The stainless-steel double-walled tank is also vacuum insulated and has up to 80 days holding time.

Another advantage of the rack system would be the ability to build the structure in advance at the shipyard. It could then be fitted during a regularly scheduled drydocking reducing the time the vessel would spend out of service. They noted that their design could also be used on new buildings in place of scarifying in-hull space for the LNG tank.

The companies report that they have identified up to approximately 900 in-service container ships with a capacity of 4,000 TEU and above that would be best suited for the conversion. The system could be scaled to the individual ship owner’s specifications.  Bureau Veritas worked with the companies reviewing the designs and has issued an Approval in Principle for the containerized LNG solution. 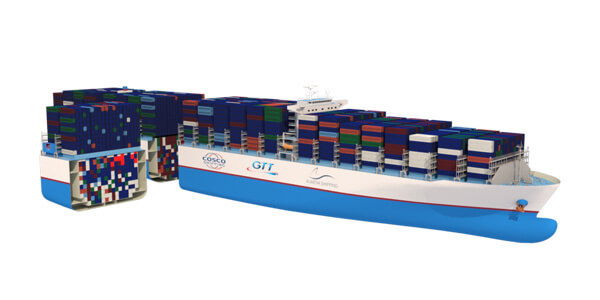 The alternate retrofit concept, which has also received an AiP from BV, was developed in partnership between Alwena Shipping, COSCO Shipping Heavy Industry Zhoushan shipyard, and GTT. Their LNG conversion concept combines a lengthening of the vessel for very large container ships. They call for the addition of a section to the hull of the ship that would contain the LNG tank and necessary fitting to reduce the lost space and provide additional TEU capacity.

In this concept, the lengthening of the ship combined with the conversion operation to LNG of the propulsion and electrical generation system on board makes it possible to reduce the operating costs of the ship going forward with the added capacity and benefits of LNG.  They would limit the financial impact linked to the period of immobilization necessary for the modification of the vessel, by building the new section in advance at the shipyard and making the necessary preparation for the lengthening.