The National Retail Federation is revising downward its forecast for retail imports during the last five months of 2022 and while still expecting a year-over-year gain, lowered its forecasted total for the year. The retail trade association, citing continued inflation and the expectation that the Federal Reserve will continue to increase interest rates, is forecasting the first sustained monthly declines in imports since before the pandemic.

“Consumers are still buying, but the cargo surge we saw during the past two years appears to be slowing down,” said Jonathan Gold, NRF Vice President for Supply Chain and Customs Policy. “Cargo volumes are solidly above pre-pandemic levels, but the rate of growth has slowed and even slid into negative numbers compared with unusually high volumes last year.”

For the full year, 2022, the NRF’s Global Port Tracker lowered its forecasted total to 26.1 million TEU. The forecast is lower by about 1 percent, 200,000 TEU, versus the previous forecast in August. However, the tracker which tallies imports at the major US seaports still sees a gain of 1.2 percent above 2021’s annual record of 25.8 million TEU.

The cargo data comes as NRF continues to forecast that 2022 retail sales will grow between 6 percent and 8 percent over 2021. Sales were up 6 percent during the first seven months of the year according to the NRF.

The association also highlights the need to keep the supply chain moving in the coming months, especially with the threat of disruptions either in the West Coast ports or on the rails as labor negotiations drag on. “The key now is dealing with ongoing supply chain issues around the globe and with labor negotiations at West Coast ports and freight railroads,” commented Gold. “Smooth operations at the ports and on the rails is crucial as we enter the busy holiday season.” 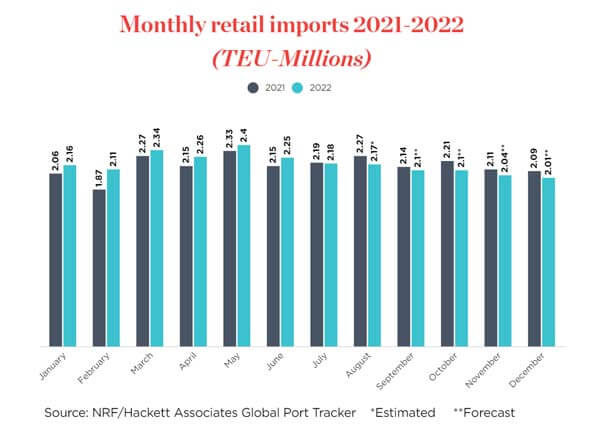 The Global Port Tracker shows that imports plateaued in July, the last month final data is available, at a level of 2.18 million TEU. It was the first month-to-month decline in 2022 and significantly below the NRF’s previous forecast of 2.26 million TEU. The NRF notes it was only the third year-over-year decline in two years and the first since December 2021.

The forecasts for the final August tally and each of the remaining months in 2022 show a monthly decline. The NRF is projecting that imports from August through December will be at 10.42 million TEU down more than 3.5 percent from last year and down 1.5 percent from last month’s forecast.

“The number of vessels waiting to dock on the West Coast has been reduced to near-normal,” Hackett Associates Founder Ben Hackett said. “But with the switch of some cargo to the East Coast, congestion and pressure on the ports has shifted to the East Coast. The inland supply chain, particularly rail, continues to face difficulties that have resulted in the delay of containers leaving ports, causing terminal congestion that impacts the ability of carriers to discharge their cargo.”

Despite the challenges, the NRF highlights that the first half of the year totaled 13.5 million TEU, a 5.5 percent increase year over year. It is this momentum that will carry 2022 to a new peak despite the slowing in the second half of the year. The NRF further projects that the current decline is expected to continue in January 2023, which is forecast at 2.11 million TEU, down 2.6 percent from January 2022.