A National Wildlife Federation report: 10 Species, 10 Years Later: A Look at Gulf Restoration after the Deepwater Horizon Disaster, summarizes the latest information available about 10 wildlife species that were affected by the spill as well as the restoration efforts underway.

The Deepwater Horizon exploded on April 20, 2010 releasing 210 million gallons of crude oil into the Gulf of Mexico over 87 days. Oil slicks from the blowout covered an estimated area of 57,000 square miles (149,000 square kilometers). 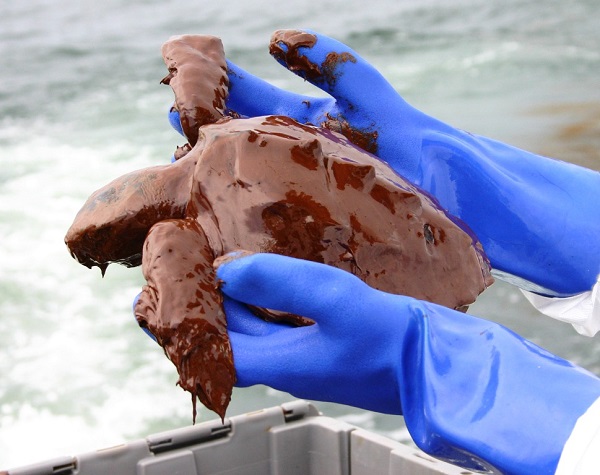 The report describes several species that are still struggling a decade later:

•     The endangered Kemp's ridley sea turtle’s once-promising recovery seems to have halted in 2010. Before 2009, Kemp’s ridley nests were once increasing at a rate of 19 percent a year on average; nesting has been erratic since the spill.
•     Coastal bottlenose dolphins in oiled areas are still sick and dying a decade later. Successful births remain less than a quarter of normal levels.
•     Corals in several locations — including some colonies that are more than six centuries old — still show signs of oil damage and are not expected to recover.
•     An estimated 17 percent of the Gulf’s tiny population of Bryde’s whales died as a result of the oil spill, and scientists predict reproductive failures among exposed whales that survived. The population was listed under the Endangered Species Act after the disaster.

The legal battle resulting from the oil spill eventually resulted in the largest environmental damage settlement in U.S. history. As a result of the criminal and civil fines, more than $16 billion was made available for the restoration of the Gulf of Mexico. Roughly $12 billion remains and will be used through 2032.

The report describes restoration activities underway on behalf of Gulf wildlife, such as:

•     Restored barrier islands in Louisiana provide nesting habitat for brown pelicans and laughing gulls, as well as other coastal birds harmed by the oil spill such as terns and skimmers.
•     Endangered Kemp’s ridley sea turtles are benefitting from a multi-faceted project which includes funding for monitoring, protecting a nesting beach in Texas, and enhancing capacity to find and assist injured sea turtles Gulf-wide.
•     Oyster restoration efforts are underway across the Gulf of Mexico. Restored oyster reefs provide habitat for dozens of species of fish and wildlife, stabilize shorelines and improve water quality.

The report also makes several policy recommendations to protect the Gulf into the future, such as improving drilling safety regulations and enforcement, fully implementing laws such as the National Environmental Policy Act and the Migratory Bird Treaty Act, and transitioning to a clean energy economy.

“For many wildlife in the Gulf, the decade-old Deepwater Horizon oil spill is not over. We will probably never understand the full extent of the damage, but we do know that we have an obligation to restore the Gulf of Mexico and to ensure that a disaster on this scale never happens again,” said David Muth, director of the National Wildlife Federation’s Gulf of Mexico Restoration Program.