Rates on the core China-to-U.S. West Coast container trade fell by half in October and have stayed down into the first week of November, according to container data company Shifl. That does not mean that the backlog has cleared at L.A. / Long Beach - far from it - but shippers have some relief from the sky-high freight rates charged this past summer.

"With the holiday shopping rush seemingly over and the already ordered goods sitting inside thousands of containers on many ships across the USA, the drop-in freight rates on the spot market continues into November 2021," said Shabsie Levy, CEO and founder of Shifl.

Last month, Shifl was among the first to report that spot rates for a 40-foot box from China to L.A. had plummeted from $17,500 in September to $8,500 in early October - a rate cut of more than 50 percent. Though it is still far above the bargain-basement prices that shippers enjoyed last year, $8,500 looks affordable when compared with the skyrocketing prices in August and September. 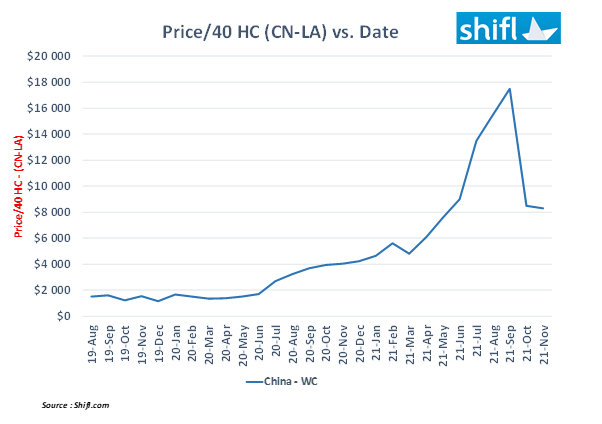 Rates are also markedly down for shipments from China to the U.S. East Coast, falling from $19,500 in September to $13,800 in November - a reduction of about 30 percent.

Levy predicted that rates will rise slightly before the Chinese New Year arrives in February, then resume their downward trend.

“After Chinese New Year as we head into the traditionally quieter months, I'm confident we will see the rates on a stable downward trajectory” he said.

That does not mean that congestion is over, however. Last week, Maersk CEO Soren Skou told reporters that shoreside logistics in the import-heavy U.S. and UK markets is not keeping up with the stream of cargo flowing out of Asia. "The whole system has become one gigantic bottleneck," he said, pointing to the hundreds of Maersk boxships that are stuck serving as floating warehouses. "A too large proportion of our capacity is tied up lying waiting outside the ports."

Maersk predicts that the congestion will carry on well into next year, and many of its customers are planning for the same timeline. In earnings calls, companies like Hewlett Packard and Under Armour have been telling investors that they are planning for supply chain disruption through the first half of 2022 (and perhaps beyond).