Over 100,000 dolphins, small whales and porpoises (small cetaceans) are slaughtered globally in hunts each year - many to be used as fishing bait in shark, tuna and other fisheries.

Sandra Altherr, biologist for the Germany-based charity Pro Wildlife, says that most people think of Japan and the Faroe Islands when talking about dolphin hunts but, numerically, the Faroe Islands are not in the top 10 of small cetacean-killing nations and Japan is only ranked 10th. That is because countries such as Peru, Nigeria and Madagascar kill small cetaceans not only for food but also for bait. 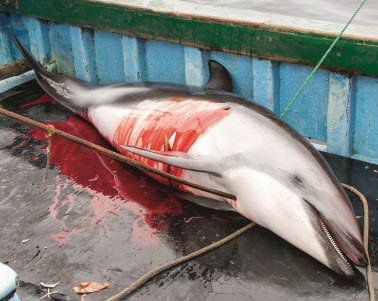 The report identifies the cruelty associated with many hunts due to the use of rudimentary methods including harpoons, knives, machetes, nets, spears and dynamite. “Death does not come quickly or painlessly,” according to Nicola Hodgins, who leads small cetacean work at WDC.

Small cetaceans also have very high levels of pollutants in their meat and blubber, meaning they are inappropriate and unsafe for human consumption, the report states.

In 2004, a report for the Convention on the Conservation of Migratory Species of Wild Animals (CMS) listed 45 small cetacean species as threatened by directed catches, while the report identifies 56
species that are actively hunted.

“In many regions, the killing of small cetaceans has evolved from incidental bycatch to a commercial hunt where animals are directly targeted for profit,” said DJ Schubert, wildlife biologist for AWI. “It is outrageous that many countries have laws protecting these species, yet enforcement is weak to nonexistent. That has allowed a black market in small cetacean meat and parts to develop and flourish.”

The report’s findings come ahead of the September 10 meeting of the International Whaling Commission in Florianopolis, Brazil. In the report, the groups call on the Commission, as well as other international conventions and governments, to strengthen protections for small cetaceans.