Ships that use scrubbers have a small impact on the water quality in ports when compared to future E.U. standards for priority substances in water, according to a new study carried out by CE Delft, with support from Deltares.

The study calculates the predicted equilibrium concentrations for 11 metals and 16 Polycyclic Aromatic Hydrocarbons (PAHs). Four of these metals and seven PAHs are priority substances under the European Water Framework Directive. In most ports and for most substances, the increase in concentrations caused by continuous discharge of a relatively high amount of scrubber wash water is less than 0.1 percent of the limit value in the Directive for 2021 for these priority substances.

In ports with low hydrodynamic exchange (such as in the Baltic sea), the increase in concentration can amount to 0.6 percent of the limit value for a few PAHs. 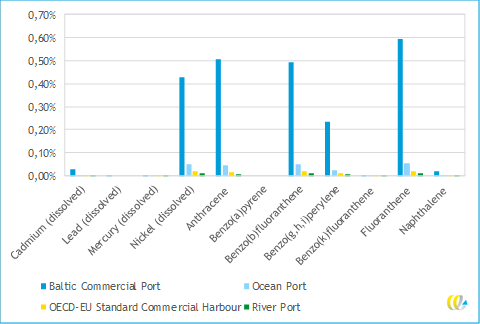 The study is unique, as it uses empirical data from almost 300 scrubber wash water samples, the most extensive dataset of this kind analyzed in this manner, and because it employs the MAMPEC-BW model to calculate equilibrium concentrations in ports. MAMPEC-BW is a model that is widely used in a regulatory context, e.g. for the approval of ballast water management systems and antifouling agents.

The study was commissioned by the Cruise Lines International Association Europe (CLIA Europe) and a number of industry partners. The report has been submitted to the GESAMP EGCS Task Team for consideration in relation to their advisory submission to the IMO on the impacts of scrubber wash water and as an IMO Information (INF) Paper for presentation at IMO PPR 7 in February 2020 by CE Delft.

The report follows preliminary results released earlier this year. The results are similar to those from a study conducted by Japan's Transport Ministry and from extensive data gathered aboard Carnival's scrubber-equipped cruise ships.