On behalf of the Getting to Zero Coalition, researchers with COP26 Climate Champions and University College London have calculated clear guidelines for what the industry will need to accomplish in order to meet the Paris Accord goal of 100 percent decarbonization by 2050.

"The adoption of zero emission fuels in shipping is bound to follow an S-curve [below], as has been the case with all historical industrial transformations . . . It starts with a slow emergence phase, when there is rapid learning and the costs start to come down," the authors wrote. "The resulting curve indicates the need for a five percent adoption rate of zero emission fuels by 2030 [to achieve zero by 2050]." 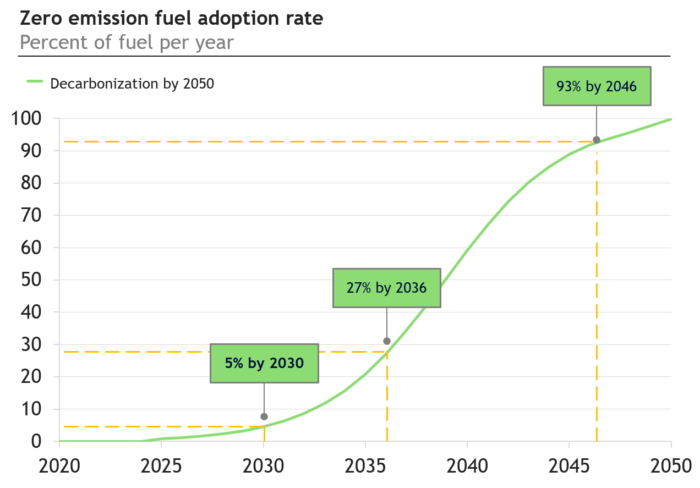 The authors predict that green ammonia will play an overwhelmingly important role. The report forecasts that if shipping aims to meet the Paris target, green ammonia will provide nearly the entirety of the fuel mix on international routes after 2045 (below). 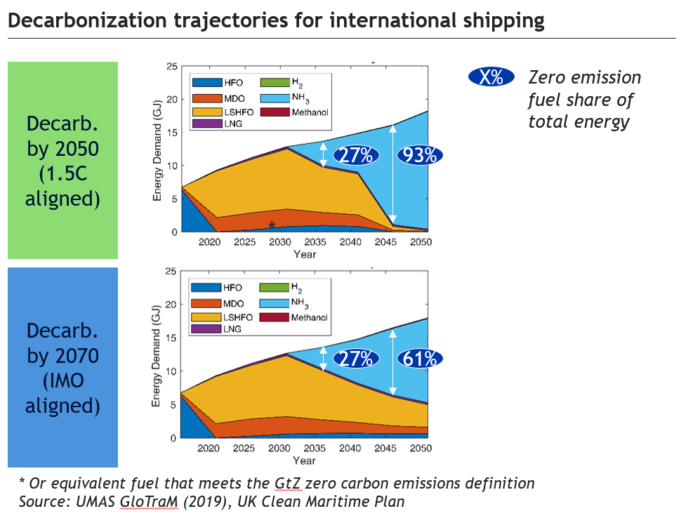 This means that vessels suited to ammonia fuel conversion - ammonia carriers and LPG carriers - will likely be among the first to decarbonize, taking care of about two percent of emissions. Container ships on high-volume fixed trade routes also offer a strong opportunity, and decarbonizing 10 major routes could cover about 0.8 percent of emissions. Decarbonizing about 15 percent of domestic shipping traffic would deliver another two to three percent. Point-to-point routes with likely access to renewable fuel bunkering represent another opportunity and could provide another two percent.

"Achieving this is feasible on all counts – with regards to fuel supply, vessel technology, port infrastructure, safety, demand, government commitment and finance," concluded the authors.

If achieved, powering this small fraction of the fleet would take a gigantic amount of renewable electricity, needed to generate hydrogen for ammonia production. The authors estimate the partial transition would require 60 gigawatts by 2030 - twice the world's installed offshore wind power capacity in 2019 - in order to cover just five percent of shipping's needs.

While this is ambitious, energy suppliers would need to build out far more than 60 gigawatts of new capacity to meet the demand, as the road, air, chemical and utility sectors will have their own gigantic renewable power needs. Japan's government alone seeks to source 85 gigawatts' worth of green / blue hydrogen for shoreside consumption on the same 2030 timeline.

Assuming that market demand for shipping continues to grow, the authors predict that the industry's energy needs will increase by roughly 30 percent between 2030 and 2050 (chart above). Based on the study's calculations and on current technology, supplying this entire growing fleet with green ammonia would require more than 1,400 GW of renewable power - and potentially much more.